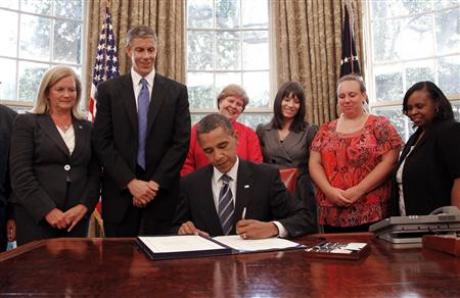 (Reuters) – The House of Representatives on Tuesday approved, and President Barack Obama promptly signed into law, an election-year bill providing $26 billion to struggling states by closing tax loopholes for multinational companies and cutting food aid to the poor.

The Democratic-controlled House of Representatives gave final congressional approval to the bill on a largely party-line vote of 247 to 161.

Democratic House Speaker Nancy Pelosi took the rare step of summoning House members back to Washington during their summer recess for a final vote on the measure after the Senate approved the legislation last week.

The bill will give states, hard-hit by the U.S. economic downturn, $16 billion more for Medicaid, the health insurance program for the poor, and $10 billion for education in the hopes they can avoid making steep cuts in already-lean budgets.

Budget gaps for the 50 U.S. states could total as much as $120 billion over the next year. States have slashed funding for everything from government employees to education since their revenues began collapsing in 2008 because of the weak U.S. economy.

“Economists have told us that if this legislation were not passed and these jobs were not saved and the budgets of the states were not stabilized we would go into another deep recession, like the one we inherited from the previous administration,” Pelosi said, referring to the Republican Bush administration.

Republicans are trying to take back control of Congress from the Democrats in November’s congressional elections. Republicans hope to build on voter anger over the size of the U.S. budget deficit, projected at $1.47 trillion this year, by emphasizing the measure’s price tag.

“Everyone knows that state budgets have been hit hard and no one wants teachers or police officers to lose their jobs,” said House Republican leader John Boehner, who opposed the bill. “But where do the bailouts end?”

Democrats want to convince voters they can strengthen a fragile economic recovery and bring down the country’s unemployment rate, currently 9.5 percent.