How broccoli (and the US supreme court) could decide the presidency 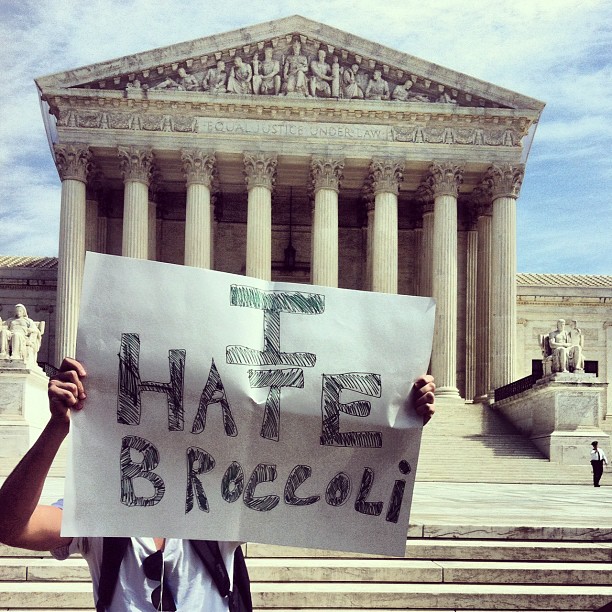 For all the talk in this US election year of the potentially crucial votes of women, Latinos, the middle class and other portions of the population, this presidential contest could come down to just a few votes in the Supreme Court of the United States (SCOTUS).

Within days, the highest court in America is expected to deliver its opinion in the six cases relating to the Patient Care and Affordable Care Act of 2010 â€“ so-called “Obamacare” â€“ which it heard in late March.

If the majority of the nine SCOTUS justices rule the laws unconstitutional in part or in full, the single-biggest achievement of Barack Obama’s presidency and the most far-reaching social reform in almost half a century will be in tatters.

Mr Obama spent over a year pushing for healthcare reform when many said his focus should have been on the economy and jobs. If his signature achievement comes back from the court marked “F” he will be wide open to the almost certainly fatal claim of having a “failed presidency”.

That’s a broadly partisan split of four and four, and this is where Justice Anthony Kennedy could be the decider-in-chief for “Obamacare” and ultimately perhaps Mr Obama’s presidency.

Appointed by Ronald Reagan in 1988, Justice Kennedy was a reliable conservative vote until the end of the Rehnquist court in 2005 but since the retirement of another Reagan appointee Sandra Day O’Connor the following year, Justice Kennedy has found himself in the role of “the swing vote” and has more frequently broken with conservatives.

The least popular and perhaps least-constitutional part of “Obamacare” is the individual mandate, which compels Americans to get health insurance or face a fine. The fundamental economics are such that the other more popular healthcare reforms, including no denial of coverage for pre-existing conditions and no ceiling on payouts could prove to be unaffordable if healthy people opt-out of insurance.

The consensus seems to be that there is a reasonable chance the mandate will be struck down, the question then becomes whether the court or the Obama administration can keep the laws standing without its economic keystone knowing Congress won’t want to touch the issue again, perhaps for decades.

In probing the constitutionality on the mandate, there was a surprising lot of talk in the court about broccoli. Can you force people to buy something just because it might be good for them, and if so, could you then force people to buy broccoli or gym memberships?