How’s your first wife, Mr President? Obama’s YouTube interview with woman who eats Fruit Loops from a bathtub turns into PR disaster as his bid to get down with the digital kids backfires

by DAVID MARTOSKO, US POLITICAL EDITOR FOR DAILYMAIL.COM
January 23, 2015 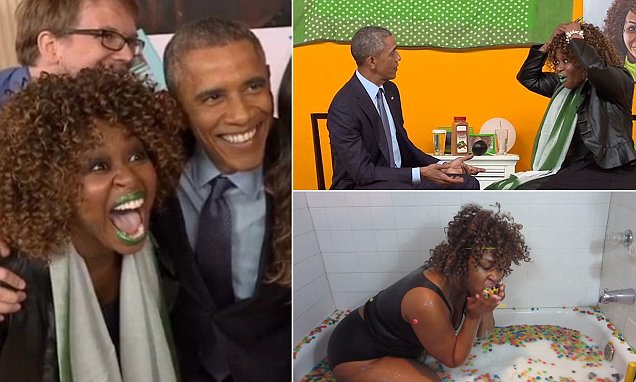 President Obama was asked about his ‘first wife’ in a PR-disaster interview on Thursday after picking three of the most popular YouTube content creators to interview him.

GloZell Green, a popular YouTube fixture known for her extreme acts like eating a ladle full of cinnamon, offered the president three samples of her trademark green lipstick as gifts for his daughters – and for the woman she called Obama’s ‘first wife.’

‘You know something I don’t?’ Obama cracked before Green corrected herself and referred to Michelle Obama as ‘first lady.’

But the PR disaster that was the White House’s 50-minute-long ‘YouTube interview’ was a national joke before it was half-over.