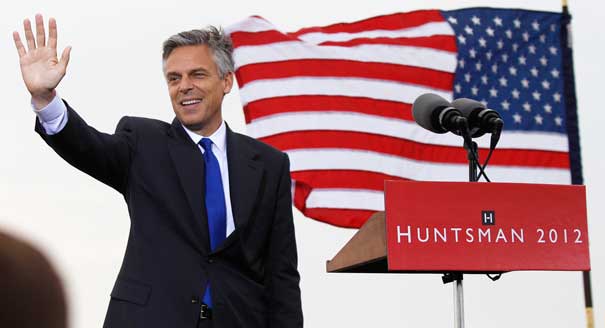 Using the Statue of Liberty as a backdrop, former Utah governorÂ Jon Huntsman formally joined the Republican presidential field Tuesday, vowing to “make hard decisions that are necessary to avert disaster” in the economy and maintain America’s standing in the world

“For the first time in our history, we are passing down to the next generation a country that is less powerful, less compassionate, less competitive and less confident than the one we got,” said Huntsman, who recently resigned as the U.S. ambassador to China. “This, ladies and gentlemen, is totally unacceptable and it is totally un-American.”

The Obama re-election campaign didn’t recognize any sort of cease-fire, however.

“Like other Republican candidates, instead of proposing a plan that will allow middle-class families to reclaim their economic security, Gov. Huntsman is proposing a return to the failed economic policies that led us into recession,” Obama campaign spokesman Ben LaBolt said.

TheÂ Democratic National Committee accused Huntsman of abandoning prior positions supporting health care changes similar to those in the new law â€” which Huntsman vows to repeal as president â€” and policies to address climate change. Chairwoman Debbie Wasserman Schultz called him “a typical Mitt Romney-like politician whose ambition is more important than his principles.”