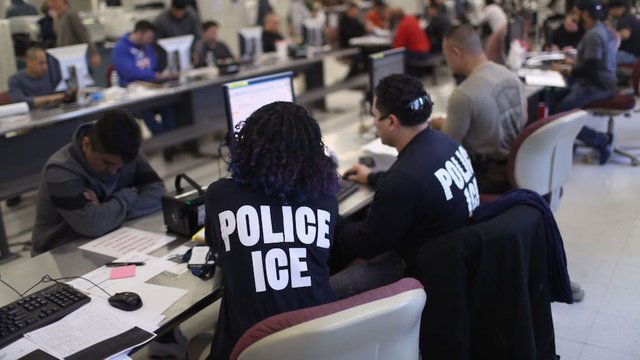 Immigration and Customs Enforcement, the federal agency tasked with arresting, detaining, and removing illegal immigrants within the United States, will temporarily scale back its operations because of the coronavirus pandemic.

“To ensure the welfare and safety of the general public as well as officers and agents in light of the ongoing COVID-19 pandemic response, U.S. Immigration and Customs Enforcement (ICE) will temporarily adjust its enforcement posture beginning today, March 18, 2020,” according to a statement from ICE, an agency within the Department of Homeland Security.

ICE’s Enforcement and Removal Operations officers will prioritize arresting people who are residing in the U.S. without permission and who are deemed “public safety risks” or who have a serious criminal record. The latter of the categories is legally barred from being released once in custody. It is not clear how significantly the scaling back of arrests will affect the number of people taken into custody. In fiscal 2019, ICE arrested approximately 143,000 people within the country.

ICE will not attempt to make arrests at health facilities following complaints from Democratic lawmakers and immigrant activists who said some might be afraid to get medical help because federal officers may be present.

“Consistent with its sensitive locations policy, during the COVID-19 crisis,” ICE said in the statement. “ICE will not carry out enforcement operations at or near health care facilities, such as hospitals, doctors’ offices, accredited health clinics, and emergent or urgent care facilities, except in the most extraordinary of circumstances. Individuals should not avoid seeking medical care because they fear civil immigration enforcement.”

Immigrants illegally residing in the U.S. who have criminal histories, including arrests without convictions, may be targeted by ICE after being released from local law enforcement custody into the communities that are considered sanctuary zones, which do not work with ICE to transfer detainees into federal custody. ICE may attempt to arrest people it is looking for as they leave their homes, walk to their vehicles, or while they are at work. A person will then go through legal proceedings in which a federal judge will determine whether he or she will be released or deported.

ICE said in a separate statement Tuesday its detained population did not include any confirmed coronavirus cases.

Immigration enforcement-free zones have been implemented before, including during the Flint water crisis in Michigan and during major hurricane responses under the Trump administration, such as Hurricane Barry last July.

The number of people deported by ICE continued to increase slowly under the Trump administration in the government’s fiscal 2019 but remains much lower than average over the past decade. In 2019, ICE returned 267,258 people to their home countries. The number was up from 256,085 in 2018 and 226,119 in 2017, which included eight months in which President Trump was in office. Trump vowed as a candidate to go after people who violated federal immigration laws.