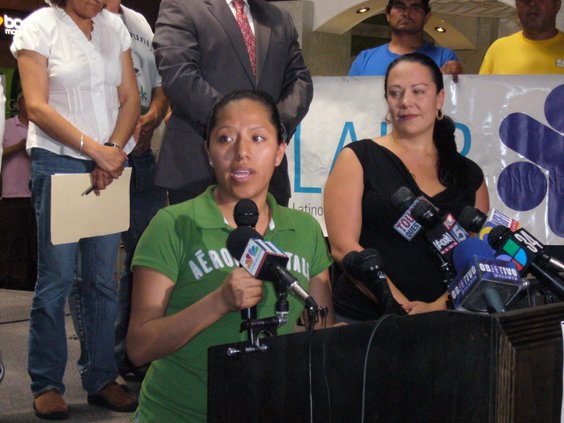 ATLANTA (AP) — When Jessica Colotl, an illegal immigrant college student, got arrested for a minor traffic violation at her suburban Atlanta campus, she became an accidental poster child for immigration reform.

On Friday, after getting arrested and released from detention for the second time in just over a month, she told reporters at a news conference she hopes her ordeal can help persuade leaders to work for an overhaul of the country’s immigration laws.

“I just hope for the best and I hope that something positive comes out of this because we really need a reform to fix this messed up system,” the 21-year-old told reporters inside a shopping center that caters to metro Atlanta’s growing community of Hispanic immigrants. Colotl, who came close to deportation after the traffic arrest, looked overwhelmed by the crush of reporters shouting questions at her.

Colotl is among hundreds of thousands of young people who have been brought into the U.S. illegally by their parents. She was 11 when her parents crossed the border with her from Mexico. Eventually, she graduated from high school in Georgia and entered Kennesaw State University in the fall of 2006. A sorority member who dreams of becoming lawyer, she was set to graduate with a degree in political science this fall.

Her first arrest came on March 30, the day after getting pulled over by university police for a minor traffic violation. She was charged with driving without a license and impeding the flow of traffic.

Then, the Cobb County Sheriff’s Office turned her over to officials with U.S. Immigration and Customs Enforcement, who sent her to a detention center in Alabama. After lobbying by Kennesaw State officials and her sorority sisters, ICE released Colotl last week. Federal officials deferred action on her case for a year, allowing her to complete her classes.

But Cobb County Sheriff Neil Warren obtained a new warrant for her arrest on Wednesday, saying she lied about her address when she was booked into jail following her initial arrest. Making a false statement to law enforcement is a felony under Georgia law.

Colotl turned herself in Friday morning and was released on $2,500 bond, according to sheriff’s office records.

Her criminal defense lawyer, Chris Taylor, said Friday that his client’s case is a perfect example of why U.S. immigration law needs reform.