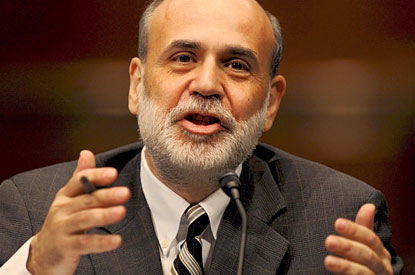 By Vicki Needham -The Hill

Federal Reserve Chairman Ben Bernanke says a plan from House Republicans to cut $61 billion in spending this year would not harm economic growth.

The GOP’s proposed spending cuts, passed as part of a continuing resolution, would probably reduce “growth on the margins” and lower gross domestic product by only one- or two-tenths of a percent, BernankeÂ told the Senate Banking and Urban Affairs Committee.

The Fed chairman’s estimate contrasts with recent reports from Goldman Sachs and Moody’s Analytics that predicted economic harm from a $61 billion spending reduction.The Goldman Sachs report released last week predicted that the Republican spending cuts would slow growth by as much as 2 percentage points in the second and third quarters of this year. Senate Democrats pounced on the analysis to argue that Republicans were trying to “drag our economy back into a recession.”

But Bernanke said that analysis is off the mark.

“Two percent [reduction in growth] is enormous and would be based on $300 billion in cuts,” Bernanke told the panel in his semiannual report to Congress. “Sixty billion to $100 billion isn’t sufficient to create that kind of effect.”

He reiterated previous statements that, while the debt and deficits are major issues for the nation, Congress needs to tackle the issue of long-term budget imbalances.

“Sixty billion won’t have much impact on the long run,” he said. “Congress needs to address the budget deficit over a 5- to 10-year window.”

Bernanke said he would like to see the nation’s structural buget deficit reduced by 2 to 3 percentage points in the next decade.

Zandi said theÂ Republican plan to $61 billion from federal spending through the next seven months, the fiscal year ends Sept. 30, would wipe out 700,000 jobs through 2012, and reduceÂ economic growth by 0.5 percentage points this year, and by 0.2 percentage points in 2012.