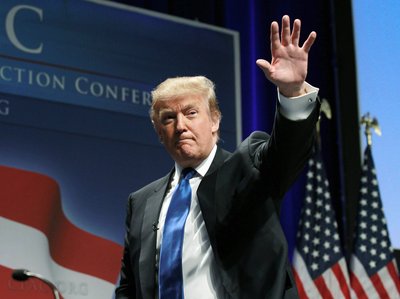 Donald Trump sent more than 2,000 conservative activists into a frenzy of approval when he told them that, unlikeÂ Ron Paul, he could win the Republican presidential nomination next year.

During a speech in which he laid out the things he would do as president, some in the audience repeatedly yelledÂ Mr. Paulâ€˜s name. â€œBy the way,â€ he responded, â€œI likeÂ Ron Paul, I think he is a good guy, but honestly, he just has zero chance of getting elected.â€

That remark drew catcalls from a sizable contingent of the Texas congressmanâ€™s supporters among the ballroomâ€™s capacity crowd of 2,400 at theÂ Marriott Wardman Park Hotel in Northwest Washington.

Mr. Trump attracted so many activists that hundreds more were directed to a spill-over ballroom with televisions for viewing the speech taking place in the main ballroom.

â€œAnd I can tell you this, if I run and if I win, this country will be respected again,â€ saidÂ Mr. Trump, a real-estate and hotel magnate with a personal fortune of more than $2 billion. The speech was his first appearance before the Conservative Political Action Conference, now in its 38th year.

This was the most important event at CPAC;Â Trump came out of the closet in the sense of revealing he is a conservative,â€ former VirginiaÂ GOP ChairmanJeffrey Frederick said after the surprise appearanceÂ Mr. Trumphad not been on the CPAC schedule and negotiations between CPAC officials andTrump representatives ran well into Wednesday night.

Mr. Trump said the world has lost respect for America and takes advantage on economic and trade fronts. Choosing words not normally uttered by politicians, he said he would restore that respect.