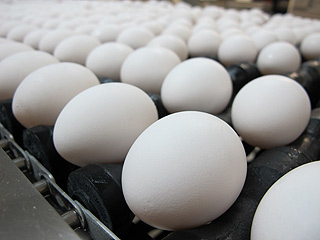 WASHINGTONÂ â€”Â  Two Iowa farms that together recalled more than half a billion potentially tainted eggs in connection with a nationwide salmonella outbreak share close ties, including suppliers of chickens and feed.

Both farms are linked to businessman Austin “Jack” DeCoster, who has been cited for numerous health,Â safety and employment violations over the last 20 years.

DeCoster owns Wright County Egg, the original farm that recalled 380 million eggs after they were linked to more than 1,000 reported cases of salmonella poisoning.

He also owns the company Quality Egg, which supplies young chickens and feed to a second farm that recalled another 170 million eggs.

Public records show that the DeCoster operation, one of the 10 largest egg producers in the country, has withstood a string of reprimands, penalties and complaints about its performance in several states, The Washington Post reported Sunday.

Allegation range from concerns about maintaining a “sexually hostile workÂ environment” to citations involving abusing the hens that lay the eggs, The Post reported.

The source of the salmonella outbreak, which has already sickened more than 1,000 people still remains a mystery that the Food and Drug Administration is working to unravel in a national investigation.

The egg recall expanded on Friday from just Wright County Egg to include Iowaâ€™s Hillandale Farms. While theÂ companies did not initially say whether their recalls were related, FDA spokeswoman Pat El-Hinnawy said the strain of salmonella bacteria causing the poisoning is the same in both cases, salmonella enteritidis.

Thoroughly cooking eggs can kill the bacteria. But health officials are recommending people throw away or return the recalled eggs.