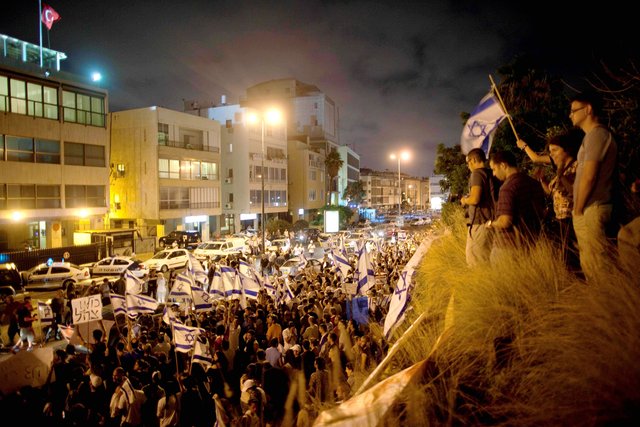 Protests were held throughout the Middle East and Europe on Monday in reaction to Israel’s commando raid on a Turkish ship ferrying supplies to Palestinians that left at least nine people dead.

Israel defended the raid and posted video on the Internet showing Israeli soldiers during the raid being attacked with metal pipes and knives by the Turkish ship’s crew.

The incident prompted Israeli Prime Minister Benjamin Netanyahu to cancel a planned visit to Washington for a meeting with President Obama set for Tuesday.

In New York, the U.N. Security Council, prompted by Arab governments, convened a special session to discuss the incident, which took place in international waters near Gaza. The Palestinians and Arabs, backed by a number of council members including Turkey, also called for Israel to lift the blockade on Gaza, immediately release the ships and humanitarian activists, and allow them to deliver their goods.

Assistant Secretary-General Oscar Fernandez-Taranco said in his briefing to the U.N.’s most powerful body that the early-morning bloodshed would have been avoided “if repeated calls on Israel to end the counterproductive and unacceptable blockade of Gaza had been heeded.”

The White House issued a statement saying it regretted the loss of life. “The president also expressed the importance of learning all the facts and circumstances around this morning’s tragic events as soon as possible,” it said.

At the State Department, spokesman P.J. Crowley, said, “We are working to ascertain the facts, and expect that the Israeli government will conduct a full and credible investigation.”

Israeli Defense Minister Ehud Barak telephoned Secretary of State Hillary Rodham Clinton and National Security Adviser James L. Jones to explain the raid. In a statement from Mr. Barak’s office, the minister said the raid was within maritime law. “The passengers on the Marmara beat our soldiers with every object they had and wounded some of them,” the statement quoted Mr. Barak as saying. “The soldiers defended themselves.”

Categories News Heard Around The World, Newsroom, Rise Up 1 | Tags: