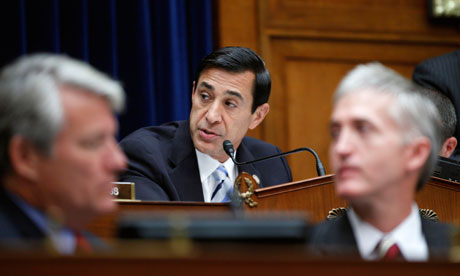 Republican Rep. Darrell Issa, making the rounds of the Sunday shows as the House gets set for an unprecedented contempt vote against Attorney General Eric Holder, says the Justice Department is guilty of lying to Congress and covering up its actions related to the Fast and Furious scandal.

The California congressman, who’s chairman of the House Oversight and Government Reform Committee, has been pursing the Fast and Furious probe for well over a year. Under that program, U.S. law enforcement officials allowed roughly 2,000 guns to be obtained by Mexican drug cartels. Weapons linked to that effort were found at the scene of a December, 2010, shooting of a Border Patrol agent. The Justice Department first denied that any senior officials were aware of the failed program, run by the Bureau of Alcohol, Tobacco, Firearms and Explosives, but then were forced to acknowledge that wasn’t accurate.

“We got a lie, we got a cover-up,” Issa of DOJ’s handling of the investigation during an interview on NBC’s “Meet the Press.” “But more importantly, five different times, we had the key people involved in front of a deposition, a private deposition, Republican and Democratic counsels, and the administration’s handlers, lawyers, said, ‘Don’t answer, don’t answer, don’t answer.’ We need answers. We can’t have answers when people take the Fifth [Amendment]. We can’t have answers when the Justice Department instructs witnesses not to answer questions.”