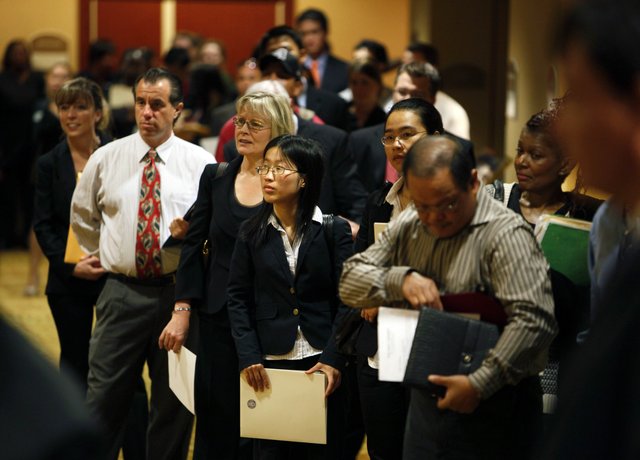 It was the second straight week that initial claims dropped sharply and the third drop in the last four weeks. Claims fell by 17,000 in the previous week.

Separately, the Commerce Department said that wholesale prices fell for a third consecutive month, pulled down by another drop in energy costs and the biggest plunge in food costs in eight years. But excluding those two volatile commodities, inflation was relatively flat.

Normally, such a sharp drop in jobless claims would be seen as a positive sign that the job market is improving. But economists will need to see the downward trend continue for several more weeks before drawing conclusions.

Another concern is that the latest drop may be the result of temporary seasonal factors. A Labor Department analyst said manufacturing companies reported fewer temporary layoffs than usual this time of year. General Motors said last month that it would forgo its customary two-week summer factory closings, which it uses to retool plants for new car models.

Meanwhile, many of the long-term unemployed are continuing to lose benefits as a result of a congressional impasse over extending emergency jobless aid.