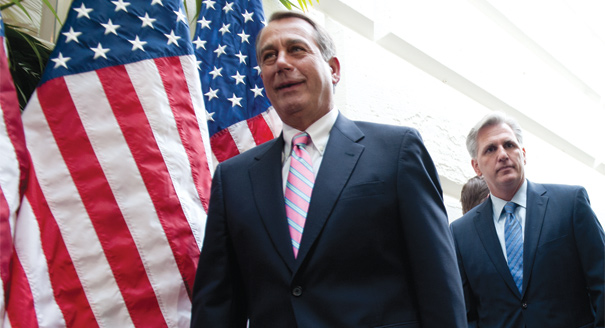 Tuesdayâ€™s breakdown in Republican discipline weakens SpeakerÂ John Boehnerâ€™s hand in White House budget talks and raises the chances of a government shutdown next month unless he and President Barack Obama greatly step up their game.

Fifty-four Republicans broke ranks with Boehner, leaving him suddenly dependent on Democrats to win House approval of a must-pass three-week spending bill to keep the government operating past Friday. Tea-party-backed freshmen contributed to the embarrassment, but an equal force was a set of more veteran conservatives â€” some with their own political agenda but also more willing to risk an immediate fight with the White House.

â€œI think we have to have a fight. I think this is the moment,â€ Rep. Mike Pence (R-Ind.)Â told POLITICO prior to the vote. â€œThings donâ€™t change around here until they have to, and Republicans ought to draw a line in the sand.â€

Leadership aides would argue later that Republican losses piled up more at the end once passage was assured. But the bottom line is the 85 Democratic â€œyeaâ€ votes saved the speakerâ€™s bill. And Majority Whip Kevin McCarthy (R-Calif.) had made a powerful appeal to his colleagues at a morning caucus, saying Republicans must stand together to strengthen their hand in budget talks with Senate Democrats and Obama.

Indeed, the Republicans have gone to great pains to sideline House Democrats, and with them, Boehnerâ€™s predecessor, former speaker and current Minority Leader Nancy Pelosi (D-Calif.). The GOPâ€™s strong preference is to keep the focus on Senate Majority Leader Harry Reid as a willing partner for Boehner and favorite punching bag for Majority Leader Eric Cantor (R-Va.), whose press operation seems to specialize in daily attacks on the sometimes erratic 71-year-old Democratic leader.

â€œIt does show a major problem. We should be at the table,â€ House Appropriations Committee ranking Democrat Norm Dicks of Washington told POLITICO.

â€œBut for the House Democrats, this would not have carried,â€ South Carolina Rep. Jim Clyburn added in a brief interview. A member of his partyâ€™s leadership and former whip when Democrats were in the majority, Clyburn said Boehner must â€œget the adults on his side married up with the adults on our side and get this done.â€

Reid told reporters he expected to move quickly to the short-term bill, which would give the two sides until April 8 to work out a larger agreement on spending for the remaining six months of the fiscal year.