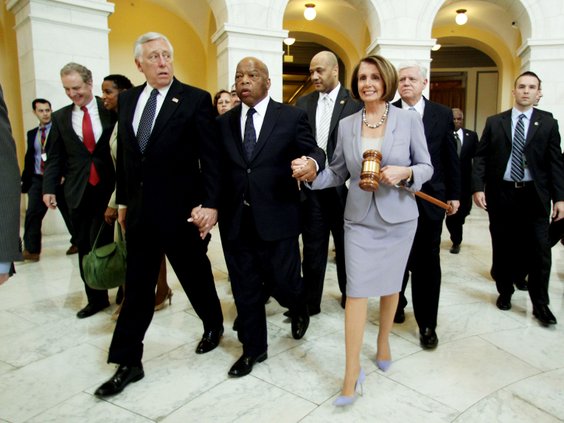 Washington (CNN) — A sweeping bill overhauling the U.S. medical system goes to President Obama’s desk on Monday to be signed into law.

The House of Representatives passed the measure late Sunday, delivering a historic victory to Obama, who had made it his No. 1 domestic priority.

The bill passed in a 219-212 vote after more than a year of bitter partisan debate. All 178 Republicans opposed it, along with 34 Democrats.

The measure, which cleared the Senate in December, constitutes the biggest expansion of federal health care guarantees since Medicare and Medicaid were enacted more than four decades ago.

A separate compromise package of changes expanding the reach of the measure also passed the House over unanimous GOP opposition, and is now set to be taken up by the Senate.

The overall $940 billion plan is projected to extend insurance coverage to roughly 32 million additional Americans. It represents a significant step toward the goal of universal coverage sought by every Democratic president since Harry Truman.

Most Americans will now be required to have health insurance or pay a fine. Larger employers will be required to provide coverage or risk financial penalties. Total individual out-of-pocket expenses will be capped and insurers will be barred from denying coverage based on gender or pre-existing conditions.

The compromise package would add to the bill’s total cost partly by expanding insurance subsidies for middle- and lower-income families. The measure would scale back the bill’s taxes on expensive insurance plans.

Numerous House members insisted they would not vote for the Senate bill without a clear promise that senators would approve the changes.

The rare Sunday votes occurred after a long weekend of intense negotiations among the White House, House leaders and individual Congress members. Obama traveled to Capitol Hill on Saturday to make a last minute plea to the House Democratic caucus. He spent much of the past week trying to personally persuade dozens of members.

She also brokered a last-minute deal among several Democrats worried about disparities in Medicare funding for individual states.

Republicans failed to stop the Democratic health care initiative despite using virtually every weapon in their legislative arsenal. GOP leaders have repeatedly warned the plan will lead to a government takeover of America’s private employer-based health care system.

They have also argued it will lead to higher premiums and taxes while imposing harsh Medicare cuts and doing little to control spiraling medical costs.

Shortly before the House voted on the bill, Pelosi said health care reform was necessary to end insurance industry abuses and bring greater economic stability to most Americans.