Lynne Patton, official who sat behind Meadows at Cohen hearing, fires back at Tlaib: Not ‘a prop’ 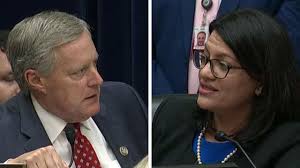 Trump associate Lynne Patton on Thursday defended President Trump and struck back at a Democratic lawmaker’s suggestion that she was used as a “prop” during the explosive Michael Cohen hearing on Capitol Hill.

Rep. Mark Meadows, R-N.C., had invited Patton, a Housing and Urban Development (HUD) official who is black, as a guest at the House Oversight Committee hearing, to counter former Trump attorney Cohen’s claim that Trump was a “racist.”

“She says that as a daughter of a man born in Birmingham, Alabama, that there is no way that she would work for an individual who was racist,” Meadows told Cohen.