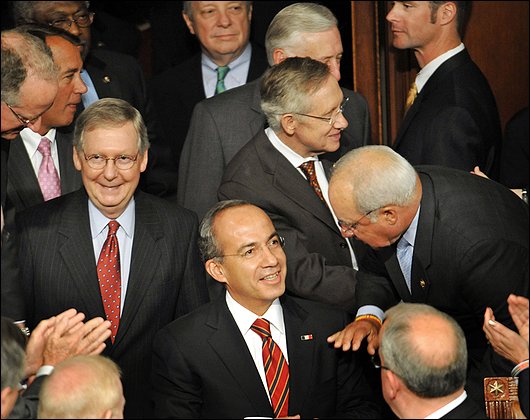 In a speech punctuated by applause and standing ovations, CalderÃ³n thanked lawmakers for providing hundreds of millions of dollars to bolster his country’s fight against drug gangs. He emphasized his government’s resolve to confront the narco-traffickers, who have killed more than 20,000 people in Mexico in recent years.

However, he said, Mexico needs greater U.S. assistance stopping the flow of assault weapons and other deadly arms across the border.

“I understand that the purpose of the Second Amendment is to guarantee good American citizens the ability to defend themselves and their nation,” he said. “But believe me, many of these guns are not going to honest American hands.”

The Obama administration has won goodwill in Mexico by publicly acknowledging the role of U.S. guns and drug consumption in fueling that country’s narcotics trade. President Obama has ordered increased searches of Mexico-bound train cargo and other measures to crack down on the illegal stream of weapons. But Mexican officials have expressed frustration that more progress has not been made.

CalderÃ³n said his government had seized 75,000 guns in Mexico in a three-year period and found that 80 percent of those whose origin could be traced were bought in the United States.

The Mexican leader also asked lawmakers to “consider reinstating” the assault weapons ban, a 10-year measure passed in 1994. Many Democrats jumped to their feet, clapping.