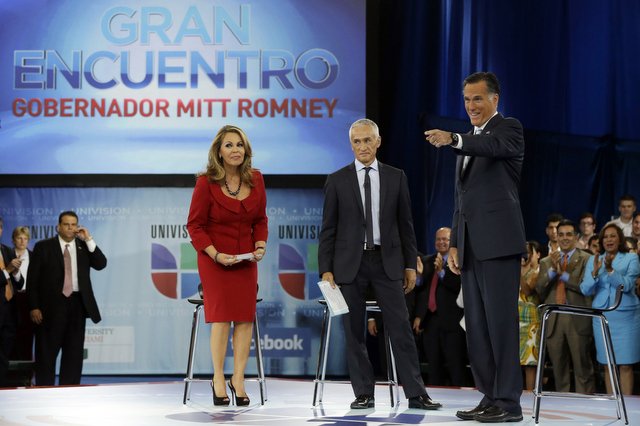 WASHINGTON,Â September 20, 2012 â€” Taking his campaign to the heart of the Latino community, Republican presidential candidate Mitt Romney sat down for an interview onÂ UnivisionÂ in Miami, the most prominent Spanish-language television network in the U.S. Seeking to increase his popularity with Latinos by shaving off even a few points of Obamaâ€™s 72% to Romneyâ€™s 22% lead, he offered up his vision for the country.

RomneyÂ began by countering his remarks, which had been secretly taped at a Boca Raton fundraiser, when he infamously said that his â€œjob is not to worry about the 47% of Americans who donâ€™t pay income taxes and believe they are victimsâ€ by saying â€œMy campaign is about the 100% in America.â€

He then went on to say that he was alarmed over the economic plight of Hispanic Americans, blaming the President for failing to improve their lives.

But when pressed by hosts Jorge Ramos and Maria Elena Salinas about the future of undocumented immigrants and his plans for them, he hemmed and hawed. While not for a mass round up and deportation of the 12 million people here illegally,Â RomneyÂ still supported mass self-deportation, whatever that means.

He explained it further this way: “I’m not in favor of a deportation â€” mass deportation â€” effort, rounding up 12 million people and kicking them out of the country. I believe people make their own choices as to whether they want to go home, and that’s what I mean by self-deportation.” Certainly a step down from his tough talk during the Republican primaries.

Romney also promised that he had still another secret plan that would be a â€œpermanent solutionâ€ to the immigration process â€œthat has been broken for years,â€ giving green cards to those students achieving advanced degrees in science, math or engineering. Nothing about green cards for those young people aspiring to be teachers, nurses, cops, or first responders.

But perhaps the biggestÂ gaffeÂ for Mitt Romney came when he spoke about DREAMers, those young people brought here by their parents illegally. â€œFor those [young people] that are already here, that are undocumented, that were brought here by their parents and therefore are illegal aliens in this country, my view is that we should put in place a permanent solution,â€ Romney said.

The interviewers three times tried to nail Romney down about President Obamaâ€™s Dream Deferred Action, which he signed this past June and went into effect in August. The order suspends the deportation of up to 1.7 million young people (aka DREAMers) under 31 years old, who were brought here as children, raised here, went to public school and graduated, have no criminal record, and met other governmental criteria, now allowing them to apply for work permits. The Deferred Action program, however, does not provide legal status.