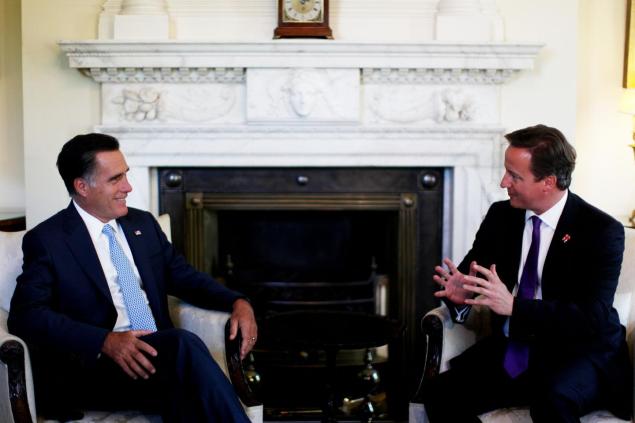 LONDON â€” Thursday was supposed to be the easy day, when Mitt Romney would audition as a world leader here by talking about his shared values with the heads of the United Statesâ€™ friendliest ally.Instead, the Republican presidential candidate insulted Britain as it welcomed the world for the Olympics by casting doubt on Londonâ€™s readiness for the Games, which open Friday, saying that the preparations he had seen were â€œdisconcertingâ€ and that it is â€œhard to know just how well it will turn out.â€

The comments drew a swift rebuke from Prime Minister David Cameron and, by dayâ€™s end, a public tongue-lashing by the cityâ€™s mayor as the Olympic torch arrived in Hyde Park.

Cameron, responding to the candidate with a note of irritation, said that â€œof course itâ€™s easier if you hold an Olympic Games in the middle of nowhere,â€ an apparent reference to Salt Lake City. That city held the 2002 Olympic Winter Games, which Romney organized. The prime minister and the mayor are conservatives, making their scolding all the more embarrassing for the candidate, an otherwise sympathetic ideological ally.

It was a difficult start to Romneyâ€™s first foray on the international stage as the presumptive Republican nominee, one that was supposed to present him to U.S. voters as a potential commander in chief. Beyond his Olympics remarks, Romney had a series of uncomfortable moments â€” some of them seemingly minor, but distractions nonetheless.

At one point, he told reporters about his previously undisclosed meeting with the head of the MI-6, Britainâ€™s secret intelligence agency.

On the first official day of his six-dayoverseas tour, Romney declined to answer reportersâ€™ questions about his foreign policy positions , saying he will avoid talking about any policy specifics while he is on foreign soil.

He ended the day in a scene that could prove damaging for a candidate sometimes labeled as out of touch. A dinner fundraiser, which raised $2Â million, was co-hosted by executives at banks under investigation in Londonâ€™s rate-fixing scandal.

For any candidate on a foreign trip, the margin for error is small, with every misstep magnified, fairly or not â€” especially so for Romney, whose visit is drawing inevitable comparisons to Barack Obamaâ€™s largely successful foreign tour as a candidate in 2008.