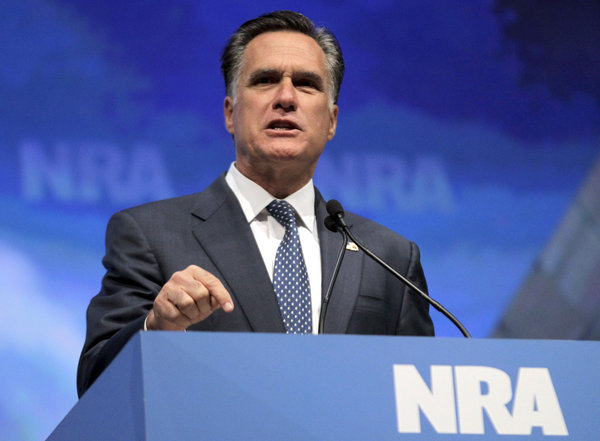 Reporting from St. Louisâ€” Mitt Romney drew a warm reception from the National Rifle Assn. on Friday as he attacked President Obama for â€œemploying every imaginable ruse and ployâ€ to restrict gun rights, which Romney pledged not to do if elected in November.

Although gun control groups have complained that Obama has done little to support their cause, Romney took a page from the NRA leadership, which has been saying that the president is waiting for a second term to crack down on firearms. He warned that Obama would â€œremakeâ€ the Supreme Court in a second term, threatening constitutional freedoms.

â€œIn a second term, he would be unrestrained by the demands of re-election,â€ Romney told a crowd estimated at 6,000 in the cavernous Edward Jones Dome. â€œAs he told the Russian president last month when he thought no one else was listening, after a re-election heâ€™ll have a lot more, quote, ‘flexibility’ to do what he wants. Iâ€™m not exactly sure what he meant by that, but looking at his first three years, I have a very good idea.â€

Referring specifically to the right to bear arms, Romney said: â€œIf we are going to safeguard our 2nd Amendment, it is time to elect a president who will defend the rights President Obama ignores or minimizes. I will.â€