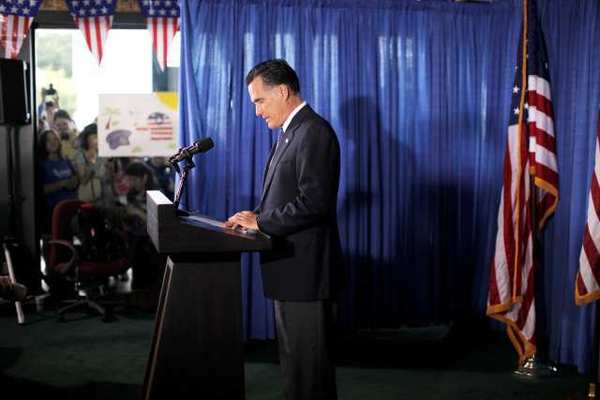 The absence of a briefing is conspicuous at a time when foreign policy has emerged as a the focal point of the campaign, following the death of four Americans, including Ambassador to Libya J. Christopher Stevens, amid violent protests in the Middle East. Last week, in his speech accepting the Democratic nomination for a second term, PresidentÂ ObamaÂ charged that Romney and his running mate,Â Paul D. Ryan, were â€œnew to foreign policy.â€

Although Romney has officially been the Republican nominee for two weeks, he has yet to get a full security briefing, his campaign confirmed. Such a briefing would not be as detailed as the daily update the president receives.

Shawn Turner, spokesman for the Office of the Director of National Intelligence, said in a statement that the process â€œis moving forward on schedule.â€

â€œThe intelligence community is working closely with the Romney campaign to finalize the logistics for the candidate briefings,â€ Turner said.

Romney on Tuesday used the violence in the Middle East to criticize the Obama administration, saying theÂ White HouseÂ hadÂ failed to condemnÂ the attacks and instead expressed sympathy with those who attacked diplomatic missions in Libya and Egypt.

Romney stood by the remarks Wednesday, even after journalists pointed out that the initial comment Romney condemned came fromÂ the U.S. EmbassyÂ in Cairo, not theÂ White House, and before protesters had breached the compound.

Obama said the comment showed a tendency by Romney to â€œshoot first and aim later.â€