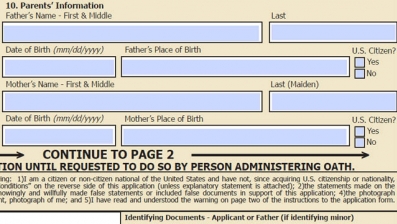 The words â€œmotherâ€ and â€œfatherâ€ will be removed from U.S. passport applications and replaced with gender neutral terminology, the State Department says.

â€œThe words in the old form were â€˜motherâ€™ and â€˜father,â€™â€ said Brenda Sprague, deputy assistant Secretary of State for Passport Services. “They are now â€˜parent oneâ€™ and â€˜parent two.â€™”

A statement on the State Department website noted: â€œThese improvements are being made to provide a gender neutral description of a childâ€™s parents and in recognition of different types of families.â€ The statement didn’t note if it was for child applications only.

The State Department said the new passport applications, not yet available to the public, will be available online soon.

Sprague said the decision to remove the traditional parenting names was not an act of political correctness.