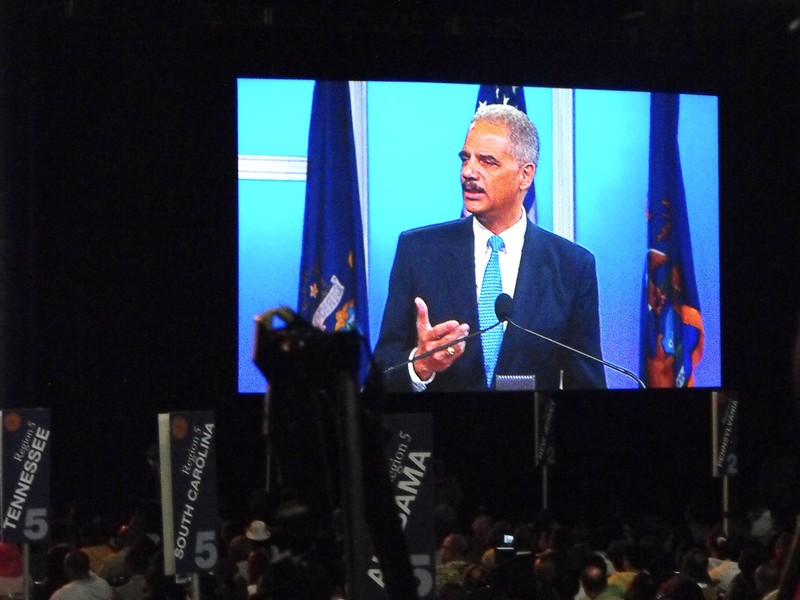 Attorney General Eric Holder addressed the NAACP Nation Convention at the George R. Brown Convention Center in Houston, Texas. What did media need in order to attend? That’s right, government issued photo identification (and a second form of identification too!), something both Holder and the NAACP stand firmly against when it comes to voting. Holder’s DOJ is currently suing Texas for “discriminatory” voter ID laws. From the press release:

All media must present government-issued photo I.D. (such as a driverâ€™s license) as well as valid media credentials. Members of the media must RSVP to receive press credentials at http://action.naacp.org/page/s/registration. For security purposes, media check-in and equipment set up must be completed by 7:45 a.m. CDT for an 8:00 a.m. CDT security sweep. Once the security sweep is completed, additional media equipment will NOT be permitted to enter and swept equipment will NOT be permitted to exit.

The head of the NAACP on Monday likened the group’s fight against conservative-backed voter ID laws that have been passed in several states to the great civil rights battles of the 1960s.

Benjamin Todd Jealous, the CEO and president of the National Association for the Advancement of Colored People, said these are “Selma and Montgomery times,” referring to historic Alabama civil rights confrontations. He challenged those attending the NAACP’s annual convention to redouble their efforts to get out the vote in November.

“We must overwhelm the rising tide of voting suppression with the high tide of registration and mobilization and motivation and protection,” he said.

“Simply put, the NAACP will never stand by as any state tries to encode discrimination into law,” Jealous said.