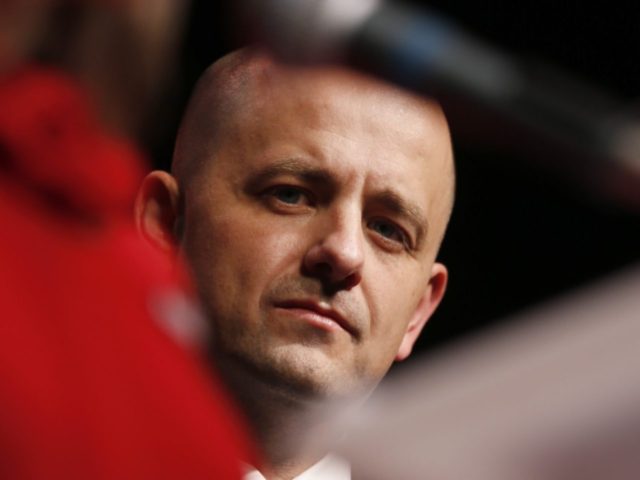 Republicans opposed to President Trump are quietly preparing to support Democratic front-runner Joe Biden, backing that could materialize in the primary as he attempts to fend off a surging Elizabeth Warren.

Some Republican operatives active in Never Trump circles are discussing what form support for Biden might take and the timing. Groups such as Stand Up Republic, co-founded by prominent Never Trump Republicans Evan McMullin and Mindy Finn, could target disaffected GOP voters in key micro-battlegrounds with finely tailored advertising in a bid to boost Biden in the Democratic primary.

Biden, 76, is the most likely Democrat to receive measurable support from the Never Trump crowd, most of whom quickly concluded that the president does not face a realistic threat from the three Republicans challenging him in the GOP primary in 2020.

“Biden is probably the only plausible candidate the Never Trumpers could support,” said Jim Dornan, a Republican operative in Washington who maintains relationships with anti-Trump Republicans.

How a Warren nomination might impact the Never Trump movement, and its participation in the 2020 campaign, is unclear.

Some Republicans in this community, who believe Warren’s policies are a different sort of extreme than Trump but equally dangerous to the country, might channel their opposition into helping one of the president’s long shot primary challengers or get behind an independent candidacy, should one develop. Other Never Trump Republicans insist that the label means exactly that.

“If it’s Elizabeth Warren, that presents a real problem because she may have a lot of plans, but most of them are terrible,” said Sarah Longwell, a veteran GOP operative and outspoken anti-Trump Republican. “Being Never Trump doesn’t mean abandoning conservative sensibilities,” she said.

“Never Trump means what it says: Never Trump. Under no circumstances can you embrace that man coming back to the White House,” countered Jerry Taylor, who runs the Niskanen Center, a centrist Washington think tank that has become a gathering spot for anti-Trump Republicans. “Most Never Trump Republicans that I traffic with are of the mind that any electoral outcome that doesn’t return Donald Trump to the White House is a good outcome, save for the wild card of Bernie Sanders.”

Biden during decades in politics was regularly scorned by Republicans for liberal positions on domestic issues and foreign policy. As a senator from Delaware, he helped sink the nomination of conservative jurist Robert Bork to the Supreme Court. As Barack Obama’s No. 2, Biden championed the Affordable Care Act healthcare overhaul. But amid the Democratic Party’s liberal turn, Biden has become the acceptable choice for Republicans searching for an alternative to Trump who can win.

Warren, the Massachusetts senator who is gaining on Biden in public opinion polls, champions ambitious liberal policies such as “Medicare for all” legislation that would abolish private health insurance. Biden supports maintaining Obamacare, although his proposal includes adding the choice to purchase a government health plan. Biden also parts ways with Democratic candidates who promise executive action to ban certain firearms, saying such a move would violate the Constitution.

These differences, and Biden’s focus on national unity and working across the aisle in Washington, are attracting the interest of Republican voters who are drifting from the party because of opposition to the president. “He’s real, and he’s not scared of Trump,” said Anna Campos, a 38-year-old airline employee from Des Moines, Iowa, who described herself as a registered Republican preparing to participate in her first Democratic caucus.

What interests Republican operatives opposed to Trump, in addition to Biden’s relative moderation, is the former vice president’s strength against Trump in key 2020 battlegrounds. In hypothetical match-ups in Heartland states such as Michigan and emerging swing states such as Arizona, Biden has led Trump and tends to outperform Warren and Sanders.

In particular, many Never Trump Republicans have almost zero confidence in Sanders’ ability to upend Trump in potentially decisive Michigan, Pennsylvania, or Wisconsin, states where culturally conservative, blue-collar voters will play a major role in which party captures each state’s Electoral College votes.

“I think those voters are much more likely to vote for Joe Biden than they are Bernie Sanders,” said Stuart Stevens, a Republican operative who in 2012 advised GOP nominee Mitt Romney and this cycle is counseling Bill Weld, one Trump’s long shot primary challengers.