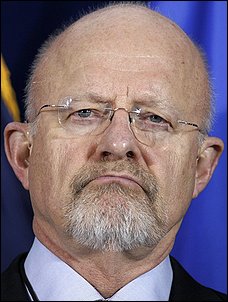 By Eli Lake, The Washington Times

President Obama’s choice to be the next director of national intelligence supported the view that Saddam Hussein’s regime in Iraq sent weapons and documents to Syria in the weeks before the 2003 U.S. invasion.

A senior U.S. intelligence official said retired Air Force Lt. Gen. James R. Clapper, a former director of the Defense Intelligence Agency and current undersecretary of defense for intelligence, will be the next DNI. A formal announcemente is expected as early as Saturday.

He will replace retired Adm. Dennis Blair, who resigned after 16 months in the position following several disputes with other intelligence leaders and, in particular, the CIA.

Gen. Clapperâ€™s selection is a rebuke to senior members of the congressional oversight committees who had said they hoped Mr. Obama would nominate a civilian as his top intelligence adviser and someone with whom the president shares a personal relationship.

Gen. Clapper will be the fourth director of national intelligence since the position was created in 2005 to oversee and coordinate all 16 independent intelligence agencies.

Two former DNIs, John Negroponte and Navy Adm. Mike McConnell, have said Congress needs to fix the law to give the director more authority over the budgets of the 16 intelligence agencies.

In his new job, Gen. Clapper may find himself making the opposite argument.

Gen. Clapper headed the National Geo-spatial Intelligence Agency between September 2001 to June 2006. The NGA is responsible for creating maps and terrestrial imagery and also assesses what is called “measurement and signature intelligence,” or MASINT, the intelligence function of analyzing such things as radar signals and the composition of air particles, soil samples and other physical characteristics of the earth.

On Iraq, Gen. Clapper said in an interview with The Washington Times in 2004 that “I think probably in the few months running up prior to the onset of combat that … there was probably an intensive effort to disperse into private homes, move documentation and materials out of the country. I think there are any number of things that they would have done.”