Newt Gingrich attacks Virginia for keeping him off ballot 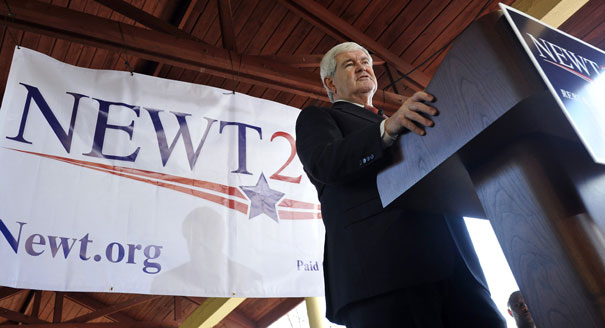 WASHINGTON (AP) â€” Presidential hopeful Newt Gingrichâ€™s campaign attacked Virginiaâ€™s GOP primary election system on Saturday for keeping him off the stateâ€™s March 6 Super Tuesday ballot, a significant setback for a candidate who has surged in popularity but has struggled to organize his campaign.

The state party said that Gingrich had failed to submit the required 10,000 signatures to appear on the ballot. Texas Gov. Rick Perry also failed to qualify, the Virginia GOP said.

The Gingrich campaign responded that â€œonly a failed systemâ€ would disqualify Gingrich and other candidates. It said Gingrich would pursue an aggressive write-in campaign in Virginia.

â€œWe will work with the Republican party of Virginia to pursue an aggressive write-in campaign to make sure that all the voters of Virginia are able to vote for the candidate of their choice,â€ Krull said.

The setback comes days before the Jan. 3 caucuses in Iowa, the leadoff contest in the campaign for the Republican presidential nomination.