Newt Gingrich proud to be ‘grandiose’ 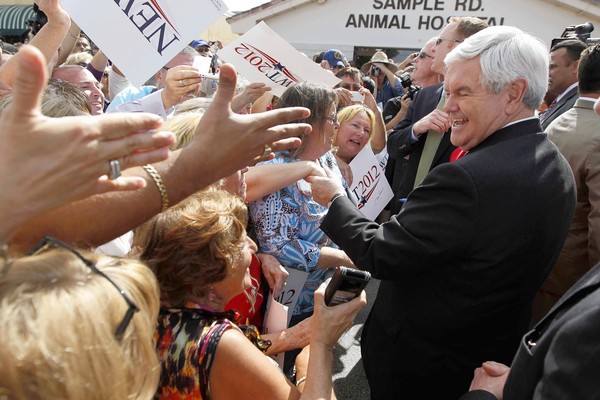 Newt GingrichÂ has been on a roll, surging while his rivalÂ Mitt RomneyÂ is flat. His poll numbers are zooming upward, his allies have dumped millions of dollars into advertising on his behalf and high-level Romney backers are following his every move in the Sunshine State. The candidate and his ragtag band sometimes struggle to keep up with their newfound momentum, but he is clearly relishing the moment.

“What you have right now is the entire establishment in panic mode running around saying whatever comes to their mind next,” Gingrich said with a grin to reporters after a rally here Wednesday.

At the event, he pledged to place a colony on the moon by 2020, “the end of my second term,” and noted that he has been attacked for being grandiose, a trait he said thatAbraham Lincoln, the Wright brothers andJohn F. Kennedy all possessed.

“I accept the charge â€” I am American and Americans are instinctively grandiose,” he told a couple of thousand voters gathered in a ballroom.

While Gingrich is drawing large and adoring crowds in Florida, his campaign is not always prepared. It runs late constantly, leaving audiences listening to an endless loop ofÂ Toby Keith‘s “American Ride” and Brooks & Dunn’s “Only in America.”

The other day, hundreds of Florida voters waited for Gingrich in the hot sun in a shopping center parking lot in Fort Myers â€” first patiently, then less so, as the candidate was more than an hour late.

When a man stepped to the microphone and announced that the former House speaker had arrived, a man in the crowd shouted out, “That’s what you told us an hour ago!”

Pressed for time, Gingrich urged his staff to turn off his campaign bus so the voters could hear him, then delivered a clipped version of his speech.

The candidate seems to be vacillating between personalities. At some events, he is the angry, scrappy underdog, appealing to a restive electorate, but not terribly presidential. At other moments, he is the historian and elder statesman who can seem passionless and flat, the same trait he ascribes to Mitt Romney. His scorched-earth approach won him a surprise lopsided victory Saturday in South Carolina, but his campaign has gyrated wildly since.

Thursday night’s debate in Jacksonville will be a test of whether Gingrich’s surge continues or fizzles.

Before Monday’s debate inÂ Tampa, Gingrich â€” whose success has been driven by sparkling performances in the debates â€” signaled that he planned to take an above-the-fray approach to confronting Romney.