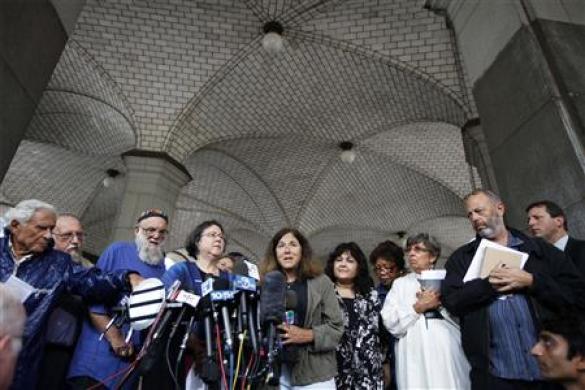 (Reuters) – Muslim, Jewish, Christian and civic groups formed a coalition on Wednesday to back a plan for a Muslim center near the site of the World Trade Center attacks in New York that has sparked heated national debate.

The cultural center and mosque face fierce opposition from conservative politicians and people who consider its location insensitive to families of the nearly 3,000 people killed in the September 11 attacks by al Qaeda militants in 2001.

But the newly formed New York Neighbors for American Values, made up of more than 40 religious and civic groups, said the debate was creating fear and division and that it would fight for U.S. constitutional freedoms to be upheld.

“We were not attacked by the Muslim world,” said Donna O’Connor, spokeswoman for September 11th Families for Peaceful Tomorrows, whose pregnant daughter was killed in the World Trade Center attacks. “We 100 percent fully support the Islamic cultural center in New York City.”

The debate turned national ahead of November elections — as Republicans seek to wrest control of Congress from Democrats — and in New York the city’s many Muslim taxi drivers linked the controversy to an attack on a colleague.

Driver Ahmed Sharif, a 43-year-old Bangladeshi immigrant, said he was slashed across the neck, face and shoulders on Tuesday by a passenger who asked if he was Muslim and observed Ramadan. Police said the attack was being investigated as a hate crime and that a 21-year-old man had been arrested and faced several charges including attempted murder and assault.

The New York Times reported that the accused attacker was a volunteer at Intersections International, a nonprofit that works to promote cross-cultural understanding and which this month released a statement supporting the Muslim center.

Intersections International said in a statement that it could not comment on whether the suspect had volunteered at the organization. “We deplore violence and any act that may be categorized as a hate crime,” the group said.