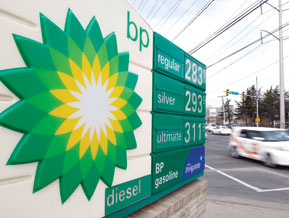 While the BP oil geyser pumps millions of gallons of petroleum into the Gulf of Mexico, President Barack Obama and members of Congress may have to answer for the millions in campaign contributions theyâ€™ve taken from the oil and gas giant over the years.

BP and its employees have given more than $3.5 million to federal candidates over the past 20 years, with the largest chunk of their money going to Obama, according to the Center for Responsive Politics. Donations come from a mix of employees and the companyâ€™s political action committees â€” $2.89 million flowed to campaigns from BP-related PACs and about $638,000 came from individuals.

On top of that, the oil giant has spent millions each year on lobbying â€” including $15.9 million last year alone â€” as it has tried to influence energy policy.

During his time in the Senate and while running for president, Obama received a total of $77,051 from the oil giant and is the top recipient of BP PAC and individual money over the past 20 years, according to financial disclosure records.

In Congress, Sen. Mary Landrieu (D-La.), who last week cautioned that the incident should â€œnot be used inappropriatelyâ€ to halt Obamaâ€™s push for expansion of offshore drilling, has been one of the biggest beneficiaries of BPâ€™s largesse. Her comments created some blowback, with critics complaining that she is too blasÃ© about the impact of the disaster, even though she was among the first lawmakers to call for a federal investigation into the spill.

As the top congressional recipient in the last cycle and one of the top BP cash recipients of the past two decades, Landrieu banked almost $17,000 from the oil giant in 2008 alone and has lined her war chest with more than $28,000 in BP cash overall.

â€œCampaign contributions, from energy companies or from environmental groups, have absolutely no impact on Sen. Landrieuâ€™s policy agenda or her response to this unprecedented disaster in the Gulf,â€ said Landrieu spokesman Aaron Saunders. â€œThe senator is proud of the broad coalition sheâ€™s built since her first day in the Senate to address the energy and environmental challenges in Louisiana and in the nation. This disaster only makes the effort to promote and save Louisianaâ€™s coast all that more important.â€