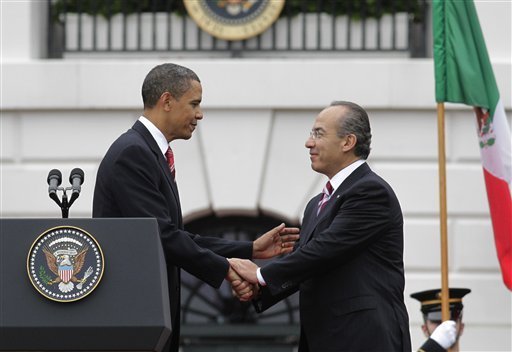 WASHINGTON (AP) – Confronting soaring frustration over illegal immigration, President Barack Obama on Wednesday condemned Arizona’s crackdown and pushed instead for a federal fix the nation could embrace. He said that will never happen without Republican support, pleading: “I need some help.”

In asking anew for an immigration overhaul, Obama showed solidarity with his guest of honor, Mexican President Felipe Calderon, who called Arizona’s law discriminatory and warned Mexico would reject any effort to “criminalize migration.” The United States and Mexico share a significant economic and political relationship that stands to be damaged the more the nations are at odds over immigration, which affects millions of people on both sides of the border.

Obama sought to show that he, too, is fed up with his own government’s failure to fix a system widely seen as broken. He said that would require solving border security, employment and citizenship issues all at once – the kind of effort that collapsed in Congress just three years ago.

The president’s stand underscored the forces working against him in this election year: the need for help from Republican critics, the impatience of states like Arizona after federal inaction, the pressure to show movement on a campaign promise, and the mood of the public disgusted by porous borders.

The Arizona law requires police to question people about their immigration status if there’s reason to suspect they’re in the country illegally, and it makes it a state crime to be in the U.S. illegally. People may be questioned about their status if they’ve been stopped by police who are in the process of enforcing another law.

The law will take effect July 29 unless legal challenges are successful. Almost twice as many people support it as those who oppose it, according to an Associated Press-GfK poll this month. It found that 42 percent favored it, 24 percent opposed it and another 29 percent said they were neutral.

Yet in a Rose Garden appearance with Calderon, Obama called the Arizona law “a misdirected expression of frustration.” He expects to announce soon what action his government may take about it, once the Justice Department finishes reviewing whether the law violates civil rights.

“In the United States of America, no law-abiding person – be they an American citizen, a legal immigrant, or a visitor or tourist from Mexico – should ever be subject to suspicion simply because of what they look like,” Obama said.

Calderon was upbeat about the chance of finding a fair, dignified way of dealing with migrants. He added: “Many of them, despite their significant contribution to the economy and to the society of the United States, still live in the shadows, and occasionally, as in Arizona, they even face discrimination.”

The immigration theme dominated a day of pageantry and showy support for Calderon, who enjoyed a state visit with his wife, Margarita Zavala.

The Mexican president was treated to a grand welcome on the South Lawn in the morning. Wednesday night, 200 guests were invited for a state dinner in the East Room, followed by entertainment back on the lawn under cover of an enormous tent. Obama repeatedly offered U.S. support for Calderon’s government, particularly in his aggressive fight against drug traffickers, a violent battle that has left roughly 23,000 people dead since the end of 2006.