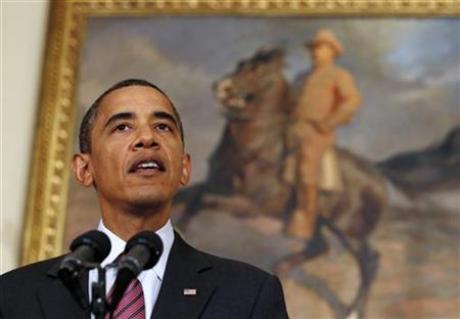 (Reuters) – President Barack Obama criticized Republicans on Saturday for supporting economic policies that “created this mess in the first place” as he tried to raise election-year doubts about his opponents.

Obama used his weekly radio and Web address to promote his own prescriptions for the ailing U.S. economy a day after his administration projected the U.S. jobless rate could average 9.7 percent this year and 9 percent in 2011.

He said an overhaul of financial regulations he signed on Wednesday would help prevent the type of reckless Wall Street behavior that triggered the 2008 financial meltdown. He said tax cuts forÂ small businesses and efforts to promote job growth in the clean energy sector would pay dividends.

“Now, I can’t tell you that this plan will bring back all the jobs we lost and restore our economy to full strength overnight,” Obama said. But he said the country was heading in the right direction.

Americans weary of recession go to the polls on November 2 to elect 435 members of the U.S. House of Representatives and 37 members of the U.S. Senate. Both parties anticipate Republicans will pick up seats against Democratic majorities in both chambers and could win the House.

Obama singled out House Republican leader John Boehner for criticism. Boehner wants to repeal and replace Obama’s healthcare overhaul and keep in place tax cuts for wealthy Americans that expire at the end of the year.

Some Democrats have also questioned whether those tax cuts should be allowed to expire at a time of economic stress. The White House wants to extend tax cuts for the middle class but end the reductions for the wealthy.