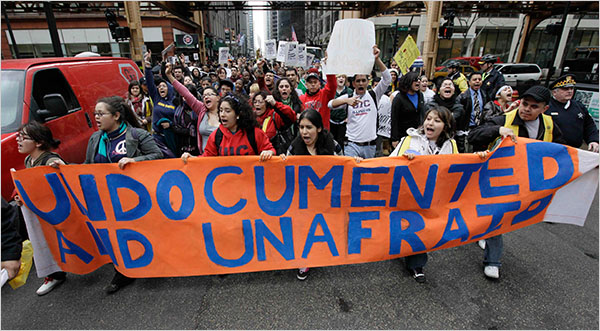 Mr. Obama spent most of the afternoon in meetings on immigration, including one with Senator Charles E. Schumer, Democrat of New York, and Senator Lindsey Graham, Republican of South Carolina, who have been holding closed-door sessions over the last six months to draw up a bill to revamp the immigration system.

The White House called the meetings to show its continued interest in an immigration overhaul, an issue that has languished since last year, in advance of a rally that immigrant groups have called for March 21 in Washington. The groups, who want to see immigration legislation passed this year, have pitched the rally as a maximum show of force with a turnout, they say, of 100,000 people.

The two senators said they gave Mr. Obama a three-page outline of the huge bill they are preparing, and they asked for his help to find additional Republican sponsors in the Senate.

But Mr. Graham, in a statement, said he had told Mr. Obama â€œin no uncertain termsâ€ that the immigration debate â€œcould come to a halt for the yearâ€ if the president moved to pass health care legislation by a method known as reconciliation, which requires a majority of 51 senators instead of 60 and would in practice require no Republican votes.

The White House has been laying the groundwork for a possible reconciliation vote since losing its supermajority in January after the Massachusetts Senate election and finding no Republican support. There was no indication Thursday that Mr. Obama would reconsider that in light of Mr. Grahamâ€™s warning.

In a separate meeting, the president sat down for more than an hour with immigrant advocates, labor leaders and Roman Catholic and evangelical Christian leaders who support an overhaul that would give legal status to millions of illegal immigrants. At a press conference in Washington on Monday, representatives of some of those groups publicly denounced Mr. Obamaâ€™s immigration policies for the first time.

Most of the advocates emerged heartened from the meeting with Mr. Obama, if only because he gave them so much time. They said the president offered a sober account of the political difficulties of an immigration bill this year, coming after the protracted battle over health care. Apparently chastened by that fight, he said that an immigration overhaul could not move forward without support from Republican lawmakers lined up ahead of time, participants said.

Mr. Obama pledged to begin rallying support from Republicans, but he also called on Mr. Graham and the immigrant advocacy and business groups to focus their efforts on building bipartisan support.

Joshua Hoyt, executive director of the Illinois Coalition for Immigrant and Refugee Rights, said of the president after the meeting: â€œHe remains fully committed to pass immigration reform. We had a very frank discussion about the difficulties.â€

In addition to opening a path to legal status for an estimated 11 million illegal immigrants, the bill Mr. Schumer and Mr. Graham are shaping would tighten enforcement against hiring illegal immigrant workers by creating a national biometric identification card for all workers, including American citizens and legal immigrants.

The bill would also further strengthen border enforcement and create a new temporary-worker program to allow immigrants to come to work in the United States in the future.

How to manage future immigration has been one of the most contentious issues for the senators, and they asked Mr. Obama for his help in breaking the logjam.

The labor movement has remained united behind a proposal for an autonomous commission to monitor the labor markets and determine how many visas for foreign workers would be needed in a given year. Unions oppose any expanded program to allow in temporary immigrant guest workers, arguing that those programs leave immigrants vulnerable to abuse and undercut American workers.

Business groups oppose laborâ€™s proposal, favoring an approach that would allow the markets, rather than a government agency, to determine labor demand. They also want a greatly expanded program for temporary guest workers.

While top leaders from the Service Employees International Union, the United Food and Commercial Workers, and the Unite Here unions were in the meeting with Mr. Obama, officials from the A.F.L.-C.I.O. said they were surprised and disappointed that they had not been invited.

In advance of the March 21 rally, young immigrants in several cities have been holding â€œcoming out partiesâ€ where they disclose publicly that they do not have legal immigration status. In downtown Chicago on Wednesday, eight immigrants made such declarations. Among them was Tania Unzeuta, a 26-year-old student from Mexico, who stood by a sign that read â€œUndocumented and Unafraid.â€

Hundreds of young people rallied Wednesday in downtown Chicago for immigration overhaul, and a handful of them publicly declared their illegal status.