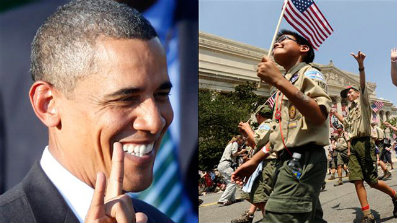 President Obama will makeÂ history as the first sitting president on a daytime talk show when he visits with the ladies of “The View.” But he’ll be missing out on another historic occasion — the Boy Scouts’ Jamboree marking the group’s 100th anniversary, right in the president’s backyard.

The Jamboree kicked off this week at Fort A.P. Hill in Virginia, where organizers had invited the president to speak to the 45,000 scouts in attendance. All three of Obama’s predecessors have made it to one Jamboree while inÂ office.

But the president will instead beÂ traveling Wednesday to New York for a taping of the ABC show, as well as Democratic fundraisers and a stop in New Jersey. The talk show appearance comes as campaign season moves into full swing, but also amid efforts to cap the Gulf oil spill for good, contain the damage from an unprecedented leak of Afghanistan war documents and battle Arizona over its immigration law — set to go into effect Thursday.Â Obama also has an out-of-town event planned for Friday inÂ Detroit.

But while the Jamboree lasts until next Tuesday, the president is sending his regards via a videotaped message.

Boy Scouts of America spokesman Deron Smith said the organization knew Obama’s invitation would hinge on his schedule and found out two months ago that he would not be able to attend.

“It just depends on his schedule,” he said, adding that “there’s always a spot” available for the president during the Jamboree. Obama also serves as honorary president of the Boy Scouts of America.

The WhiteÂ House said Tuesday that the fundraisers, not the TV appearance, prevented the president from attending.

“We were always going to be out of town that day,” Communications Director Dan Pfeiffer told FoxNews.com in an e-mail. “It was never canceled.”

The Boy Scouts released a statement acknowledging that Obama has hosted Boy Scouts groups in the Oval Office twice since taking office.

“We thank the president for his effort to recognize scouting and look forward to working with his administration as we work toward accomplishing our mission of preparing young people to become exceptional adults,” the group said.

The Jamboree is held once every four years. This year’s festivities mark the organization’s 100-year anniversary — scouts are scheduled to visit Washington, D.C., and other regional attractions in connection with the celebration.

Every president is typically invited, though not all are able to attend. Obama’s three predecessors each made it to one Jamboree in person. President George W. Bush spoke in 2005, President Bill Clinton in 1997 and President George H.W. Bush in 1989.