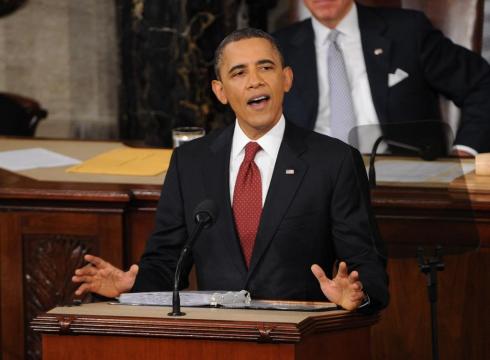 President Obama heads out on the road Wednesday to visit battlegrounds states where he will try to sell his agenda, and his reelection bid, outlined in a lengthy address to Congress and the nation on Tuesday night.

In his annual State of the Union address, President Obama suggested Americans try to follow the lead of U.S. military forces. He said Americans must get past personal ambition and partisan obsession to “focus on the mission at hand”: keeping alive the American dream by restoring the U.S. economy.

The president said that the “defining issue of our time” is finding the means to uphold the promise that if people work hard, they will succeed.

“No challenge is more urgent. No debate is more important. We can either settle for a country where a shrinking number of people do really well, while a growing number of Americans barely get by. Or we can restore an economy where everyone gets a fair shot, everyone does their fair share and everyone plays by the same set of rules,” he said.

But the devil is in the details, and Republicans are unlikely to agree to many of the proposals the president laid out. Indiana Gov. Mitch Daniels, who delivered the GOP response, said that the president’s rigid adherence to ideology was suffocating innovation.

“The extremism that stifles the development of homegrown energy, or cancels a perfectly safe pipeline that would employ tens of thousands, or jacks up consumer utility bills for no improvement in either human health or world temperature, is a pro-poverty policy,” Daniels said.

In a speech heavy in focus on manufacturing, job training and tax reform, Obama said Tuesday that the most immediate priority for a divided Congress is to stop a tax hike on 160 million working Americans and prolong aÂ payrollÂ taxÂ cutÂ set to expire next month.

At the same time, Obama proposed raising taxes on the wealthiest Americans. He said anyone who makes more than $1 million a year should not pay less than 30 percent in federal taxes and should get no special subsidies or deductions.

“Do we want to keep these tax cuts for the wealthiest Americans? Or do we want to keep our investments in everything else? … Because if we’re serious about paying down our debt, we can’t do both,” he said.

Saying that the country can get its mojo back, the president said the “house of cards” collapsed in 2008 as a result of mortgages being sold to people “who couldn’t afford or understand them,” banks that bet using other people’s money and profited either way and regulators who looked the other way or didn’t have the authority to stop the bad behavior.

Since then, he said, American manufacturers are hiring again and new rules have been put in place to hold Wall Street accountable.

“The state of our union is getting stronger, and we’ve come too far to turn back now” Obama said.