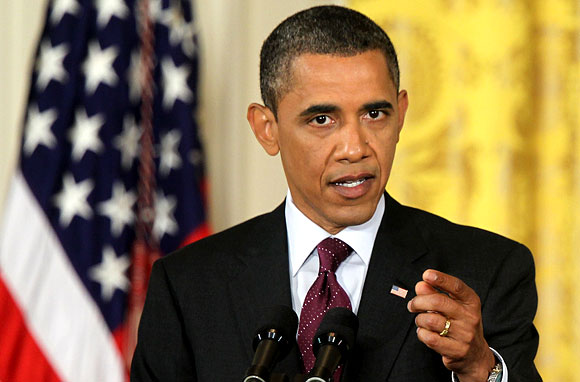 President Obama is sharply intensifying pressure on congressionalRepublicans in negotiations over the federal debt, depicting GOP leaders as supporting tax breaks for jet-setting corporate executives at the expense of college scholarships or medical research.

Obama chastised Republican leaders in an hourlong televised news conference Wednesday, moving the debt talks out of the realm of closed-door Washington meetings and into full public view, and setting off a high-stakes effort to mobilize public opinion.

Obama and Republicans have been locked for more than a month in a confrontation over raising the nation’s borrowing limit. Republicans have insisted they will not approve the increase unless Obama and congressionalÂ Democrats agree to reduce the debt in the long term â€” though the GOP spending plan would also require raising the debt ceiling. Last week, top Republicans pulled out of discussions with Vice PresidentÂ Joe Biden, objecting to aÂ White House demand that any deal include additional revenue as well as spending cuts.

The news conference represented a rare instance of Obama using the presidential megaphone to defend his position. In the past, the president has been prone to delivering lengthy answers in a professorial tone, relying on abstract ideas. By contrast, Obama on Wednesday laid out his arguments in simple, everyday terms, echoing an ex-president that he has been studying:Â Ronald Reagan.

“These are bills that Congress ran up,” Obama said, in explaining why the U.S. must not default on its debt obligations. “They took the vacation. They bought the car. Now they’re saying, ‘Maybe we don’t have to pay.'”

Obama also chided lawmakers for taking frequent recesses instead of staying in Washington to finish work on the debt question. He added that his two young daughters exhibited more diligence in doing their homework than Congress had shown.

“They don’t wait until the night before,” he said. “They’re not pulling all-nighters. Congress can do the same thing.”

Reacting to the criticism, senators considered abandoning a weeklong July 4 recess, and House leaders said they would stay in session until negotiations were finished.

But Republican leaders offered scant hope of a shift on the issue of tax revenues. “The president is sorely mistaken if he believes a bill to raise the debt ceiling and raise taxes would pass the House,” said House SpeakerÂ John A. Boehner (R-Ohio).

Some of the GOP rank and file, however, indicated they would consider new revenue sources, posing a potential challenge to party unity. “I’m not too sympathetic to all these jets myself, so I’d be willing to consider that,” said Sen.Â Jeff Sessions of Alabama, the top Republican on the Budget Committee.

Others said it would depend on which loophole was being eliminated. “I’m willing to take a look at the special deals,” said Sen.Â Ron Johnson (R-Wis.). “I would love to do away with special tax breaks, but not legitimate business deductions.”