Obama Puts His Stamp on New Strategy for a Leaner Military 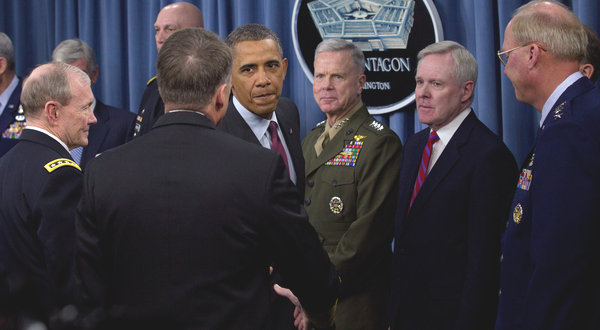 WASHINGTON â€”Â President ObamaÂ has for the first time put his own stamp on an all-encompassing American military policy by turning from the grinding ground wars that he inherited from the Bush administration and refocusing on what he described as a smaller, more agile force across Asia, the Pacific and the Middle East.

In an unusual appearance at the Pentagon briefing room on Thursday, Mr. Obama outlined a new national defense strategy driven by three realities: the winding down of a decade of war in Iraq and Afghanistan, a fiscal crisis demanding hundreds of billions of dollars in Pentagon budget cuts and a rising threat from China and Iran.

A fourth reality, not mentioned in the briefing room, was Mr. Obamaâ€™s re-election campaign and the chorus of Republican presidential candidates who have sought to portray him as decimating the Pentagon budget and being weak in his response to Iran.

Mr. Obama, who spoke surrounded by a tableau of the Joint Chiefs of Staff in dress uniforms and with chests full of medals, underscored the national security successes of his administration â€” the ending of the Iraq war, the killing of Osama bin Laden and the ouster of Col. Muammar el-Qaddafi of Libya â€” before declaring that the United States would downsize to a smaller ground force, get rid of â€œoutdated cold war-era systemsâ€ and step up investments in intelligence-gathering andÂ cyberwarfare.

He also said, in what seemed aimed at the Republicans as well as the Defense Department officials in the room, that â€œour military will be leaner, but the world must know the United States is going to maintain our military superiority.â€

Despite the pageantry, many elements of the new strategy had a â€œback to the futureâ€ quality and echoed the goals of a smaller but more technically proficient military advanced by Defense Secretary Donald H. Rumsfeld before the Sept. 11 attacks. Those plans were soon overtaken by the need to build up ground forces for the kind of conventional wars that the Pentagon had not envisioned a decade ago.

â€œConventionally it makes perfect sense to avoid fighting worst-case wars,â€ said Anthony H. Cordesman, a military analyst at the Center for Strategic and International Studies. â€œBut the 20th century, and even the 21st century, is a warning about how well anybody can do long-term forecasting. I have listened for decades to, â€˜This time weâ€™re going to be more efficient, this time weâ€™re going to use technology.â€™Â â€