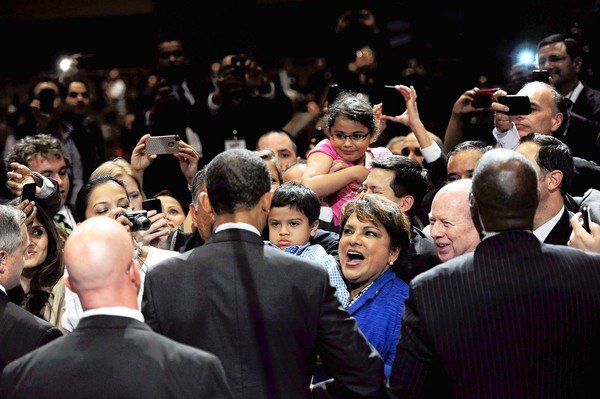 By Paul West and Kathleen Hennessey, The Los Angeles Times

TAMPA, Fla. â€”Â President ObamaÂ pounded Republican challengerÂ Mitt RomneyÂ over his past business practices and current immigration views during a swing Friday through the heart of the nation’s largest battleground state.

At a boisterous campaign rally near the west coast of Florida, the president reacted sharply to a report that Romney, as a private-equity investor in the 1990s, had owned companies that were at the forefront of the trend to send U.S. jobs overseas.

“Today it was reported in theÂ Washington PostÂ that the companies his firm owned were ‘pioneers’ in the outsourcing of American jobs to places like China and India. Pioneers!” Obama said, referring toBain Capital, which Romney co-founded. “We don’t need an outsourcing pioneer in the Oval Office. We need a president who will fight for American jobs and American manufacturing. And that’s what my plan will do.”

The Obama campaign has attempted to capitalize on politically unpopular elements of Romney’s business background, such as the layoffs of workers at some companies Bain Capital took over, or the big profits reaped by Romney and his partners at firms they owned that later went bankrupt. But after an early flurry of attack ads, primarily aimed at white, working-class swing voters in states like Ohio, the campaign had shifted the focus of its commercials to Romney’s record as governor of Massachusetts.

On Friday, the president’s campaign rushed out a Web video assailing what it called Romney’s “career of shipping American jobs” to other countries.Â David Axelrod, Obama’s senior campaign strategist, told reporters that the Post story was a “significant moment in the campaign.”

The Romney campaign called the Post report “fundamentally flawed,” drawing a distinction between “outsourcing” and “offshoring.” (The Obama campaign said neither would appeal to voters.)

Obama’s remarks to the crowd at Hillsborough Community College followed an earlier campaign-style appearance before NALEO, the National Assn. of Latino Elected and Appointed Officials, which is meeting at Disney World, in the heart of Florida’s vote-richÂ Interstate 4Â corridor. The visit was considered officialÂ White HouseÂ business, so most of the trip was paid for by taxpayers.

But many in the crowd of 1,000 reacted as if they were at anÂ Obama rally, jumping to their feet three times to cheer and applaud. The president’s remarks were designed, in large part, to rebut Romney’s speech to the same group a day earlier, when he promised to pursue bipartisan action as president to overhaul the nation’s dysfunctional immigration system.

Reminding the Latino officials that Romney had assured them he’s a man who keeps his promises, Obama fired back by recalling another Romney pledge, made during the Republican primaries: to veto theÂ Dream Act, which would provide a path to citizenship for young illegal immigrants.

“We should take him at his word,” declared Obama, as a gasp ran through the crowd, which may not have expected a frontal presidential attack before an officially bipartisan, though heavily Democratic, audience. “I’m just saying. I believe that would be a tragic mistake. You do too.”