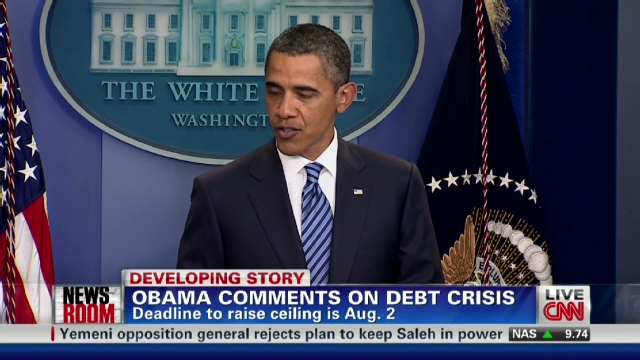 PresidentÂ Obama said Tuesday that he may have to halt Social Security benefit checks in August if he and congressional leaders canâ€™t agree to raise the governmentâ€™s debt limit.

Top Republicans denouncedÂ Mr. Obamaâ€™s comments as scare tactics aimed at pressuring theÂ GOP to blink in the high-stakes fight, andSenate Minority LeaderÂ Mitch McConnell said he no longer thinks a debt solution is possible â€œas long as this president is in the Oval Office.â€

Seeking to shift political peril to theÂ White House,Â Mr. McConnell, a Kentucky Republican, proposed a set of procedures that would allow the president to raise the debt limit without having to rely on Republican votes.
House SpeakerÂ John A. Boehner, Ohio Republican, told Fox News that negotiators are considering several backup plans as prospects for a deal diminished.

Mr. Obama warned of dire consequences should the two sides fail to reach an agreement.

â€œI cannot guarantee that those checks go out on Aug. 3 if we havenâ€™t resolved this issue. Because there may simply not be the money in the coffers to do it,â€ he told CBS News.

Itâ€™s the furthest the administration has gone in signaling that it is thinking about what payments it will have to suspend if a deal isnâ€™t reached.

His comments drew a harsh reaction from the nationâ€™s largest senior citizens lobby, which called on him and lawmakers to â€œstop the irresponsible rhetoric.â€

â€œNow is not the time for elected leaders on either side of the aisle to play politics with Americansâ€™ hard-earned Social Security benefits,â€Â AARPExecutive Vice PresidentÂ Nancy LeaMond said. â€œWhile there may be disagreement over different policies, there should be no disagreement that it would be both irresponsible and immoral to fail to make Social Security benefit payments to seniors who worked and contributed over their lives to earn their benefits.â€

The group also warned against cutting Social Security andÂ Medicarebenefits to help pay the nationâ€™s bills.
Bipartisan negotiations over the presidentâ€™s â€œgrand bargainâ€ to slash trillions of dollars from the deficit appear to be sputtering. Lawmakers from both parties have met for three consecutive days, but instead of emerging with signs of progress theyâ€™ve drawn lines they say they canâ€™t cross.

TheÂ Treasury Department says the government will bump against the $14.29 trillion borrowing ceiling on Aug. 2.

At that point, the government will not be able to borrow any more money and can pay out only what it generates in revenue. Given that spending exceeds revenue by about 36 percent, that means more than a third of all payments the government makes would have to be suspended.

With pessimism growing,Â Mr. McConnell on Tuesday introduced a â€œbackup planâ€ to increase the debt limit should negotiations fail.

Mr. McConnellâ€™s proposal is a complicated legislative maneuver that would, in effect, let the president increase the nationâ€™s debt limit with only Democratic votes and subsequently allow Republicans to wash their hands of the politically poisonous issue.