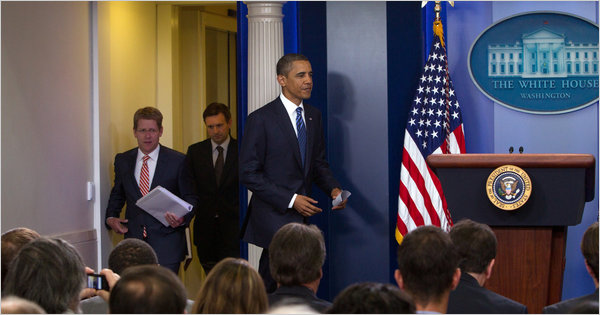 PresidentÂ Obama on Tuesday called onÂ Congress to â€œdo something bigâ€ to reduce the federal budget deficit, spurned talk of a short-term deal with Republicans to raise the debt limit and invited leaders to come Thursday to theÂ White House to revive negotiations.

Mr. Obama said he wants to have a deal done within two weeks in order to leave some breathing room ahead of the looming Aug. 2 deadline, when theÂ Treasury Department says the government will run up against the $14.29 trillion debt ceiling and would be forced to suspend some payments.

Some inÂ Congress have proposed a short-term increase to give all sides more time to work out a solution, while others have said tax increases or cuts to entitlements canâ€™t be options.Â Mr. Obama, though, rejected both stances.

â€œIâ€™ve heard reports that there may be some inÂ Congress who want to do just enough to make sure that America avoids defaulting in the short term, but then want to kick the can down the road when it comes to solving the larger problem of our deficit,â€Â Mr. Obama said. â€œI donâ€™t share that view.â€

The presidentâ€™s meeting invitation was accepted by congressional leaders, and it marks an escalation of effort on all sides.

Senate Minority LeaderÂ Mitch McConnell, Kentucky Republican, said the closed-door meeting is a chance for the president to see that some options cannot be part of a final deal, such as tax increases or more stimulus spending.

â€œThese discussions are not about rich and poor, or an election, but theyâ€™re about making Washington take the hit and make some tough choices for a change – not the taxpayers and job creators,â€Â Mr. McConnell said.

Republican lawmakers want deep spending cuts attached to a vote on the debt ceiling. Many Democrats want to eliminate tax loopholes and find other ways to raise more revenue.

Thursdayâ€™s summit, which is expected to include two top Democrats and Republicans each from both the House andÂ Senate, is the latest in a series of meetings theÂ White House and members ofÂ Congress have called to try to work out a debt deal.

Earlier negotiations with Vice President Joseph R. Biden broke down last month when Republicans said they had reached the point whereÂ Mr. Obama himself must get personally involved.

The president said Tuesday that his negotiating team made progress in discussions with lawmakers over the Independence Day weekend, and that he now thinks there are â€œenough people in each partyâ€ to reach a compromise. ButÂ Mr. Obama didnâ€™t offer any new details on his position, saying he is seeking a â€œbalanced approachâ€ of spending cuts and tax increases.

Even as Republican leaders said theyâ€™ll attend the meeting, the patience of their partyâ€™s rank-and-file members was waning for the sort of big, negotiated deal that would likely be dropped in their laps at the end of the secret talks.