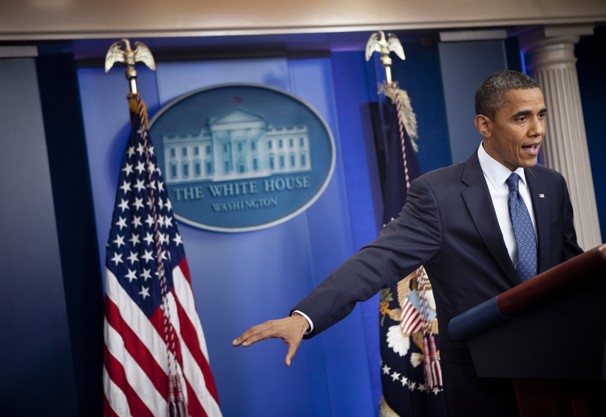 When President Obama last spoke to the nation, he said he was ready to make Republicans an offer they couldnâ€™t refuse. In exchange for trillions of dollars in cuts, including to Medicare and Social Security, Republicans would have to agree to a fraction of that in increased tax revenues.

â€œEven a deal that is not as balanced as I think it should be is better than no deal at all,â€ Obama said on Friday.

Obamaâ€™s political advisers have long believed that securing such an agreement would provide an enormous boost to his 2012 campaign, according to people familiar with White House thinking. In particular, they want to preserve and improve the presidentâ€™s standing among political independents, who abandoned Democrats in the 2010 mid-term elections and who say reining in the nationâ€™s debt is a high priority.

In many ways, it has been a remarkable transformation for a Democratic president who had made the centerpiece of his first year in office a massive spending bill to boost the economy and the near-universal expansion of health insurance.

The risk for Obama now is that his pursuit of a sweeping package could deeply disappoint his Democratic allies, who believe the president may be giving away too much. His calculation that an ambitious plan to reduce the nationâ€™s debt by $4 trillion over 10 years is so important that heâ€™s willing to endanger one of the best weapons in his partyâ€™s arsenal â€” the argument that Democrats will protect Medicare and Social Security at all costs.

â€œItâ€™s a political and policy gamble â€” the idea that people would welcome a large deal when it required middle-class Americans to sacrifice, even down the road, at a time when they have fewer resources,â€ said Neera Tanden, chief operating officer at the Center for American Progress and former domestic policy adviser in the Obama administration.

Administration officials said the shift fits with Obamaâ€™s vision of what his presidency should look like.

â€œThe president ran for the office to bring both parties together to solve big problems. Thatâ€™s what he is trying to do here, even if it comes with political pain,â€ said Dan Pfeiffer, the White House communications director, in an e-mail.

Obama has said a big deal is best for the nationâ€™s economy and would help preserve entitlements over the long run. He has also started making the argument to liberals that they wonâ€™t be able to get their priorities accomplished until there is a plan to tame the debt.