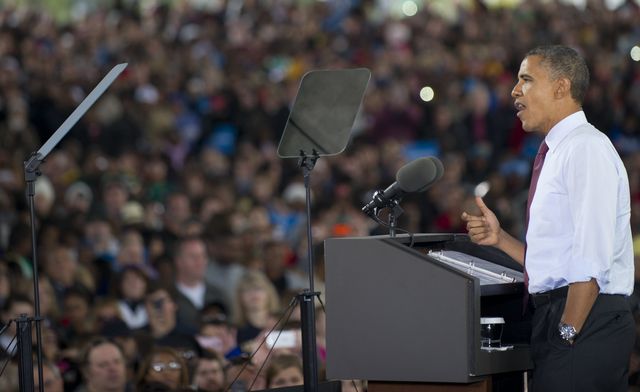 President Barack Obama told supporters today in Wisconsin, home turf of Republican vice presidential candidate Paul Ryan, to dedicate their energy to voting for him and not disparaging Republicans.

â€œIn the coming weeks, folks here in Wisconsin and across the country, people are going to have a very big choice to make,â€ Obama said at a fundraiser in Milwaukee. â€œTop-down economics never works.â€

â€œNo hissing or booing,â€ he said when someone from the audience expressed displeasure with Republican policies. â€œJust voting.â€ At a public rally later in the evening, that theme became a call-and-response line, with Obama exhorting the crowd not to boo, and the audience shouting â€œvote.â€

Obamaâ€™s visit to Wisconsin came as heâ€™s leading challenger Mitt Romney in the state even as Republican political groups have outspent Obama supporterss on advertising.

The president poked fun at Republican Romneyâ€™s wealth, which was again revealed in the 2011 tax returns that the Romney campaign released yesterday.

Obama has opened up a 54 percent to 40 percent lead over Republican challenger Mitt Romney in a Sept. 13-16 Marquette University poll. The survey of 601 likely voters in Wisconsin had a margin of error of plus or minus 4.1 percentage points.

An NBC News/Wall Street Journal/Marist College poll conducted Sept. 16-18 of 968 likely voters in Wisconsin gave Obama a 50 percent to 45 percent advantage over Romney, with a margin of error of plus or minus 3.2 percentage points.