Obama thinks election would be close but he’d win 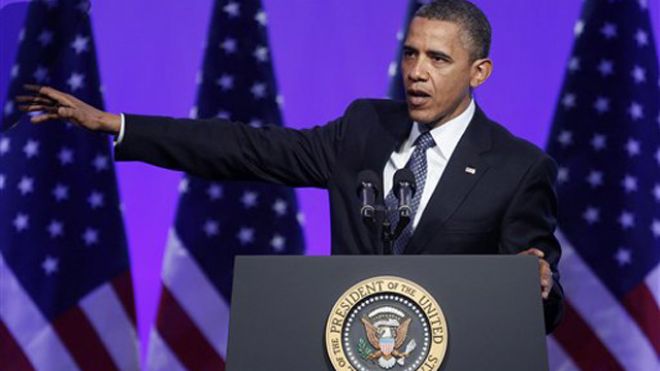 NEW YORK (AP) â€” President Barack Obama told campaign donors Monday that “if the election were held today, I think it’d be close, but I think we’d win.” He said his opponents were “spending like nobody’s business” and that Democrats need substantial sums to counterpunch.

“We now have 99 days left, and if I can say that every day for the next 99 days then we will be able to embark on the next phase of this journey,” Obama told an intimate crowd of well-heeled donors. ”

The president held court in the Parisian-style NoMad hotel in Manhattan’s Flatiron District with 60 people who contributed $40,000 each, raising more than $2 million for the 2012 elections.

Obama went through his administration’s efforts to boost the struggling economy but allowed that “right now, the economy is still rough enough for enough people that this is going to be a close election. He said “continued headwinds” were likely, including the financial uncertainty in Europe.

“I don’t think that ultimately that the Europeans will let the euro unravel, but they’re going to have to take some decisive steps,” Obama said. “And I’ve been spending an enormous amount of time trying to work with them.”

Obama said big-spending super PACs “are engaging in an experiment that we have not seen in American democracy for quite some time. They are spending like nobody’s business and focusing on negative ads.”

Obama said the Democrats don’t have to match that spending dollar-for-dollar, “but we do have to make sure that we can get our message out effectively.”

While the president was raising millions in New York, Republican rival Mitt Romney trolled for cash overseas, working a fundraiser into his schedule in Israel. Both sides are in a pell-mell race for campaign dollar as polls show the two candidates running about even. June was the second consecutive month in which Romney brought in more money than Obama.

Vice President Joe Biden, in an email to supporters, wrote Monday: “This isn’t hyperbole or exaggeration: If we don’t win this election, it will be because we didn’t close the spending gap when we could.”