Obama to campaign in NJ — With Christie 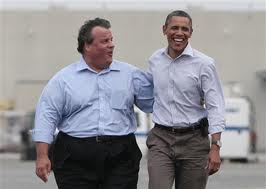 By Justin Sink and Amie Parnes – The Hill

Mitt Romney and President Obama will re-emerge on the presidential trail on Wednesday, but in starkly different ways.

Romney will hold a trio of events in the swing state of Florida with prominent Republicans Sen. Marco Rubio (Fla.) and former Florida Gov. Jeb Bush.

Obama will also appear with a prominent Republican: New Jersey Gov. Chris Christie, who will be giving the president a tour of the damage in his state in the wake of Hurricane Sandy.
The divergent paths underscore the challenge both campaigns have faced in recent days, trying to best balance the demands of a presidential race and the need to project the appropriate sensitivity as the Eastern Seaboard grapples with the aftermath of the catastrophic storm.

Obama has a natural advantage with the power of incumbency. The White House made sure to update reporters early Tuesday morning with the presidentâ€™s work on response efforts to Sandy â€” including his endeavors overnight â€” and released photos of Obama meeting with federal officials. Later in the afternoon, the president visited the Red Cross, where he declared that his â€œmessage to the federal governmentâ€ was â€œno bureaucracy, no red tape.â€