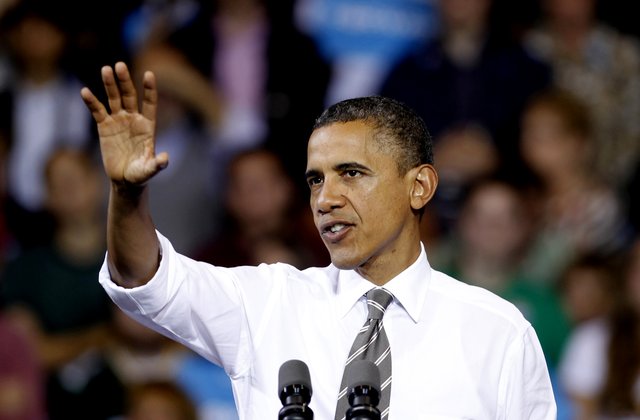 In a two-minute ad,Â ObamaÂ looks into the camera as he promotes an economic plan he says will create 1 million manufacturing jobs, cut oil imports and hire thousands of new teachers.

The ad set to air in New Hampshire, Virginia, Florida, Ohio, Iowa, Nevada and Colorado comes as both men shadow each other while looking for votes in a closely contested race. It was not running in North Carolina, Wisconsin and Pennsylvania, underscoring the states where the presidentâ€™s campaign contends the election is truly being fought.

On Thursday, the two candidates are scheduled to campaign in the same state for the third straight day, this time in Virginia, a critical battleground in the Nov. 6 election. Romney is to appear in suburban Washington for a veteransâ€™ event, whileÂ ObamaÂ speaks in Virginia Beach.

The simultaneous visits follow an all-day duel Wednesday in Ohio, where Romney declared he can do more thanÂ ObamaÂ to improve the lives of average people.Â ObamaÂ scoffed that a challenger who calls half the nation â€œvictimsâ€ was unlikely to be of much help.

Amid the hunt for working-class voters, Romney released a new ad Thursday aimed at coal miners. It included video ofÂ ObamaÂ as a candidate in 2008 saying he would support laws to force emitters of greenhouse gases to buy allowances at auction. â€œSo if somebody wants to build a coal-powered plant, they can; itâ€™s just that it will bankrupt them,â€Â ObamaÂ says in the ad.

Romney spokeswomanÂ Andrea SaulÂ responded toÂ Obamaâ€™s two-minute ad by arguing that theÂ GOPÂ nominee can deliver a recovery, whileÂ ObamaÂ has mishandled the economy during his four years in office. â€œIn the time it takes his latest ad to run, our national debt grows by at least another $5 million,â€Â SaulÂ said in a statement.

SaulÂ cited theÂ Commerce Departmentâ€™s announcement Thursday of sluggish economic growth in the last quarter as evidence ofÂ Obamaâ€™s economic failings. The growth rate was lowered from a previous estimate of 1.7 percent to 1.3 percent for the April-June quarter because of the severe drought that reduced farm production in the Midwest.

Meanwhile, new Republican-leaning independent groups have entered the presidential advertising fray as polling suggests Romneyâ€™s campaign may be losing ground againstÂ ObamaÂ in key states such as Ohio and Florida.