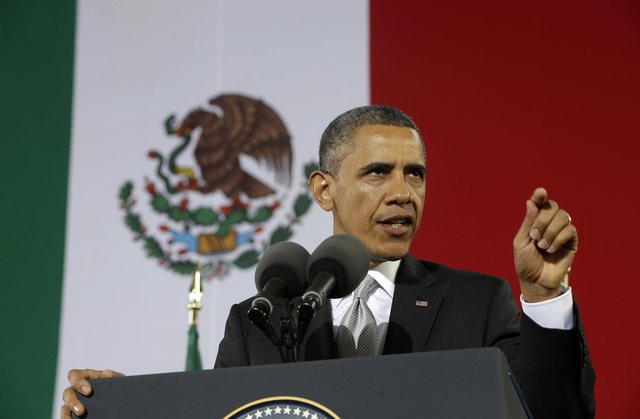 On his fourth trip to Mexico as president, Mr. Obama delivered a wide-ranging speech to students in Mexico City in which he pledged to help reduce gun violence there and to enact immigration reform that includes a pathway to U.S. citizenship for illegal immigrants.

Mr. Obama didnâ€™t mention the Justice Departmentâ€™s â€œFast and Furiousâ€ gunrunning operation that led to thousands of weapons being lost south of the border. Instead, he portrayed his push for stricter gun laws in Congress as a potential benefit for Mexicans, where up to 60,000 people have been killed in the past four years in drug wars and other violence.

â€œMost of the guns used to commit violence here in Mexico come from the United States,â€ Mr. Obama said at Mexico’s Anthropology Museum. â€œI think many of you know that in America, our Constitution guarantees our individual right to bear arms. And as president, I swore an oath to uphold that right, and I always will.â€

But he drew cheers from Mexicans when he added, â€œAt the same time, as Iâ€™ve said in the United States, I will continue to do everything in my power to pass common-sense reforms that keep guns out of the hands of criminals and dangerous people. That can save lives here in Mexico and back home in the United States. Itâ€™s the right thing to do.â€