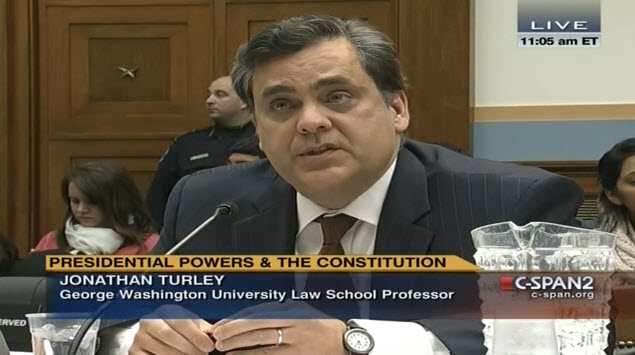 REP. BOB GOODLATTE (R-VA): Professor Turley, the constitution, the system of separated powers is not simply about stopping one branch of government from usurping another. It’s about protecting the liberty of Americans from the dangers of concentrated government power. How does the president’s unilateral modification of act of Congress affect both the balance of power between the political branches and the liberty interests of the American people?

JONATHAN TURLEY: Thank you, Mr. Chairman. The danger is quite severe. The problem with what the president is doing is that he’s not simply posing a danger to the constitutional system. He’s becoming the very danger the Constitution was designed to avoid. That is the concentration of power in every single branch.

This Newtonian orbit that the three branches exist in is a delicate one but it is designed to prevent this type of concentration. There is two trends going on which should be of equal concern to all members of Congress. One is that we have had the radical expansion of presidential powers under both President Bush and President Obama. We have what many once called an imperial presidency model of largely unchecked authority. And with that trend we also have the continued rise of this fourth branch. We have agencies that are quite large that issue regulations. The Supreme Court said recently that agencies could actually define their own or interpret their own jurisdiction. (House hearing, December 3, 2013)