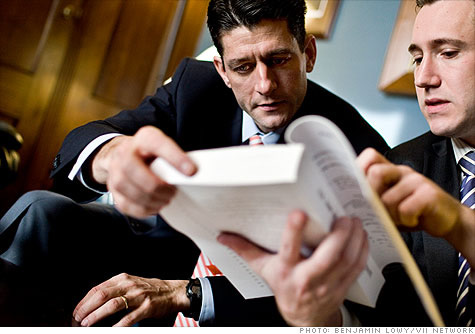 (Fortune Magazine) — On the eve of President Barack Obama’s winter health-care summit, Rep. Paul Ryan is dining at Talay Thai, a no-frills restaurant with metal chairs and Formica tables. On this frigid evening, Ryan strolled coatless to Talay — “I’m from Wisconsin!” he says — from his cramped Capitol Hill office, where tonight, as on most nights, he’ll sleep on a cot.

Such frugality is fitting for a politician who, as he sips ice water, frets that America is “sleep-walking toward a debt crisis.” Ryan tells me: “Within a few years a sale of government bonds will fail. The capital markets will go crazy, and the Fed and Treasury will run to Capitol Hill demanding a giant bailout. Adding Obamacare would make the crisis go deeper and arrive faster.”

It isn’t unusual to hear such antispending rhetoric from Republicans these days. What makes Ryan a rarity is that he’s been preaching cerebral free-market ideas during his 11 years in Congress, despite getting little attention for his views.

Now the 40-year-old Janesville, Wis., native is emerging as the leading GOP voice on economic policy, thanks to his detailed blueprint for solving what both Democrats and Republicans agree is a perilous fiscal future. (How bad is America’s financial picture? The President’s budget for 2011 forecasts deficits running at more than $1 trillion, or an unsustainable 4.2% of GDP, in 2020 — and that assumes low unemployment and decent growth of the economy.)

Republicans aren’t the only ones suddenly taking notice of Ryan’s views on deficit reduction and government spending. During his now-famous appearance at the Republican congressional retreat in Baltimore earlier this year, the President singled out Ryan. “It was my 40th birthday, and I’m sitting at lunch with my 6-year-old son on my knee,” marvels Ryan. “And the President starts talking about me. I was amazed!”

Obama noted that Ryan had “made a serious proposal” to rein in the deficit and then praised him for at least addressing entitlement spending. Following those apparently peaceful words, Democrats launched a withering assault over the next three days as budget director Peter Orszag, Democratic Congressional Campaign chairman Chris Van Hollen, and House Speaker Nancy Pelosi all pummeled Ryan for threatening the safety net for the elderly and providing tax breaks for the rich.

Ryan got his chance to confront the President at the health-care summit Feb. 25. Seated across from Obama, Ryan addressed him directly with a six-minute, numbers-laden, wonkish analysis of the Senate bill that contradicted the administration’s pledge that the plan wouldn’t add to the mountainous deficit.

Ryan correctly stated that the bill projects that Medicare will lower reimbursements to doctors by $371 billion over the next 10 years, yet Congress would cancel those cuts in a separate bill, all part of an attempt to mask the true size of future deficits through “gimmicks and smoke and mirrors.” Obama steered the discussion away from Ryan’s numbers, and the White House hasn’t challenged his analysis.

What is the Ryan plan , and why is the Obama administration seemingly obsessed with it? Ryan calls his proposal, published in January, the Roadmap for America’s Future. It’s a remarkably comprehensive, daring manifesto that tackles every part of the budget on a presidential scale, from Social Security to tax policy to health-care reform.

The goal is to eliminate the deficit, and eventually all federal debt, without any crippling tax increases. Under Ryan’s plan, for example, federal spending would reach just 24% of GDP in 2035 and then fall, vs. the CBO’s projection of 34% and rising from there. Ryan would make the deficit disappear by mid-century.

Ryan, to be sure, voted for President George W. Bush’s tax cuts, which added to the U.S. deficit, but he blames the current mess on excessive spending, which he proposes to control.