Obama’s plan for Memorial Day speech in Illinois wiped out by rain, lightning 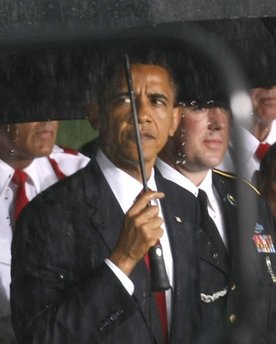 Yet that’s what happened after a torrential downpour ruined well-laid presidential plans. Chased out of a Memorial Day service in Illinois by a fierce storm, Obama flew home to make remarks that he intended to deliver eight hours earlier. Instead of speaking in front of thousands, he addressed a small crowd of hastily summoned service members in a hangar.

Obama had planned to honor the holiday at Abraham Lincoln National Cemetery in Elwood, about 50 miles south of Chicago. But on a day of small calamities, he stepped onstage at the moment a thunderstorm started. Lightning flashed, and a torrent of heavy rain pelted thousands of visitors standing in an open field.

“Excuse me, everybody, listen up,” Obama said, taking over the microphone. “This may not be safe.” He advised the crowd to disperse, saying, “We don’t want anybody struck by lightning.”

It was not exactly the message Obama had hoped to deliver to military families.

Suddenly, the president — already facing some criticism for skipping the traditional Memorial Day service at Arlington National Cemetery — had no public forum for honoring the nation’s war dead.

Obama waited and waited in an administration building at the cemetery, hoping the rain would subside. Outside, sheets of rain knocked over a wreath he had placed at a cluster of tombstones.

His advisers quickly arranged for him to meet with some service members huddled inside crowded buses — a chance, at least, for him to deliver his thanks in private. He held another private meeting with veterans and their families a short time later at the Hines Fisher houses, a rehabilitation center outside Chicago.

On the way between the events, a sport-utility vehicle carrying White House advisers blew a tire, forcing the motorcade to a halt in the middle of the highway. No one was hurt.