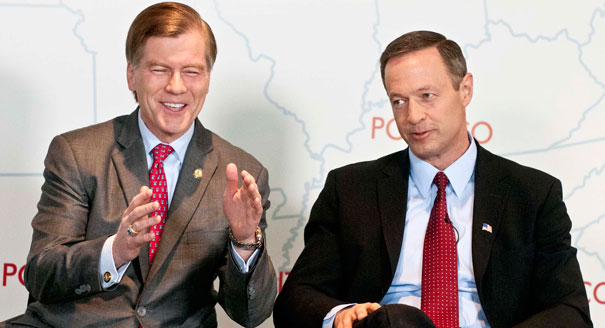 Squaring off on NBC’s “Meet the Press” in what for the two governors is becoming a regular Sunday morning match-up, O’Malley, leader of the Democratic Governors Association, spoke highly of Virginia’s economic record under McDonnell, who heads the Republican Governors Association.

McDonnell signed a bill last week that requires women to receive an ultrasound before getting an abortion — one of several controversial measures produced during a legislative session in which newly empowered conservative lawmakers pulled the state to the political right.

“There’s been a lot more time spent pandering to the extreme right-wing ideologues of the Republican Party [than talking about jobs],” O’Malley said. “All of these things that take us back are not strengthening our economy and creating jobs.”

McDonnell countered that those bills represent just a small percentage of what his state accomplished under Republican stewardship, and Democrats were leeching on to them to change the conversation away from the economy.

A jobs report last week showed unemployment down to 8.3 percent after months of hovering closer to 9 percent. It was good news for President Obama, who has been under election-year fire from Republicans for failing to revive a recession-riddled economy. But McDonnell brushed off the jobs gains, saying they were proof that Republican governors and private companies are the ones driving the economic turnaround and not Obama.