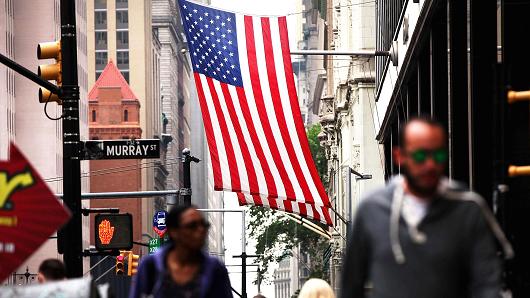 The election of Donald Trump has brought with it a surge in optimism in the United States over the economy and stocks not seen in years.

The CNBC All-America Economic Survey for the fourth quarter found that the percentage of Americans who believe the economy will get better in the next year jumped an unprecedented 17 points to 42 percent, compared with before the election. It’s the highest level since President Barack Obama was first elected in 2008.

The surge was powered by Republicans and independents reversing their outlooks. Republicans swung from deeply pessimistic, with just 15 percent saying the economy would improve in the next year, to strongly optimistic, with 74 percent believing in an economic upswing. Optimism among independents doubled but it fell by more than half for Democrats. Just 16 percent think the economy will improve.

“We’re looking at America moving into a more positive era with regard to economic expectations,” said Micah Roberts, vice president at Public Opinion Strategies, which serves as the Republican pollster for the CNBC survey. “No doubt the election of Donald Trump has ushered that in.”

The poll of 800 adults around the country was conducted Dec. 2 to 5, and has a margin of error of 3.5 percentage points. Hart Research Associates served as the Democratic pollsters.