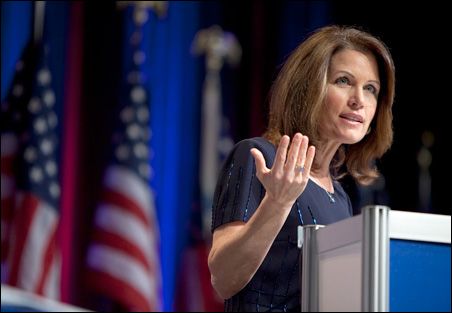 Republican Congresswoman Michele Bachmann worked through a gauntlet of meetings on her first visit to Iowa since expressing interest in the 2012 presidential nomination â€” all with a cold, snowy backdrop familiar to the Minnesotan.

Bachmann, the guest speaker at an Iowans for Tax Relief Reception tonight, began her day with the groupâ€™s president, Ed Failor Jr., at his near east-side Des Moines office. Bachmann, accompanied by her husband, Marcus, and three staff, met with Failor and ITR communications director Katie Koberg to discuss the event, scheduled from 5:30 p.m. to 7:30 p.m. at the downtown Des Moines Marriott.

But, sitting at a round table in the tastefully decorated office, the foursome slipped into a short political dialogue about the opportunity conservatives have, in light of Republicansâ€™ capturing the U.S. House in November.

â€œWeâ€™ve got to stay on message. We showed what we can do when we turn out across the country,â€ Bachmann said.

â€œBut we have lost the grip on the brand,â€ Failor added, referring to Republicans who had strayed from spending discipline. â€œYou actually have to do stuff that matters now.â€

â€œThatâ€™s why the debt ceiling will be the big test,â€ Bachmann replied, referring to the upcoming vote in the House that has divided Republicans. Bachmann opposes raising the debt ceiling.

Bachmann next arrived, an hour behind schedule, at Smokey Row, a coffeehouse in the Sherman Hill neighborhood (not a Republican hotbed), where she met with about 50 Republicans and grass-roots conservative activists, including tea party organizers from the Des Moines area and around the state.

â€œWeâ€™ve got this tiny window of opportunity,â€ Bachmann told the group during a question and answer session, referring to Republicans in the U.S. House. â€œAnd the tea party patriots are saying we have to take our country back.â€

Kathy Carley of Altoona was impressed. â€œShe reminds me of Representative Steve King,â€ Carley said after the coffeehouse appearance. â€œSheâ€™s not afraid to speak her values. And I like the values she stands for. They represent Iowa and the grass-roots of America.â€

Bachmannâ€™s Iowa visit has garnered a lot of attention. The outspoken conservative is a favorite of tea party conservatives and a target for Democrats. A Fox News Channel crew is trailing her today, and 50 media representatives are credentialed to cover her appearance in Des Moines tonight.